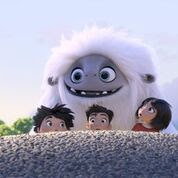 SYNOPSIS -This is a comedy adventure in 3D & 2D which takes audiences on an epic 2,000-mile adventure from the streets of a Chinese city to the breathtaking Himalayan snowscapes! Interestingly, the film is the 1st animated film with a central female character written & directed by a female filmmaker Jill Culton, formerly an animator & storyboard artist at Pixar, where she collaborated on Toy Story, Toy Story 2 & A Bug’s Life before helping to craft the story for Monster’s, Inc. As well, she spent several years at Sony Animation, where she directed their first animated-feature film, Open Season! One she hit upon the idea of a Yeti Movie, she came up with an epic tale of a young woman who finds herself at an unimaginable crossroads. 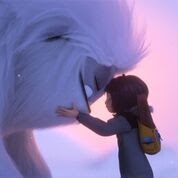 When teenage Yi (Chloe Bennet) encounters a young Yeti (Joseph Izzo) on the roof of her apartment building, she & her friends, Jin (Tenzing Norgay Trainor) & Peng (Albert Tsai), name him ‘Everest’ & embark on an epic quest to reunite the magical creature with his family at the highest point on Earth.
But the trio of friends will have to stay one-step ahead of Burnish (Eddie Izzard), a wealthy man intent on capturing a Yeti, and zoologist Dr. Zara (Sarah Paulson) to help Everest get home.
As the journey unfolds, Everest has to help Yi, Jin & Peng unlock an inner bravery they didn’t know they had as they strive to return the mystical creature to the place where he belongs! Everest will help them discover where they truly belong too!
CREDITS –
Music-Rupert Gregson-Williams Edited by Pamila Ziegenhagen
HANSA PICTURES Release