Presented by music giant T-Series, ‘Allah Ve’ features Punjab’s hot sensation Jassie Gill in a never-seen-before avatar, much to the surprise of music aficionados and his ardent fans!
The highly-anticipated song which has been launched today on YouTube comes across as beautiful image makeover for the popular singer-actor who will be seen sporting a cool, suave look in the melodious number. 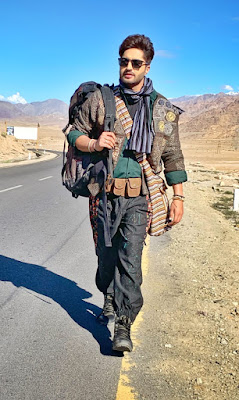 Directed by Navjit Buttar, Allah Ve is not just hummable with beautiful lyrics by Raj Fatehpuria and composition by SunnyVik, but it also looks equally grand in terms of visuals and has within it a heart-touching narrative about a man who loses everything dear to him.
Shot across the exotic holiday destination of Leh-Ladakh, ‘Allah Ve’ sees Jassie effortlessly slipping into his character of a man reminiscing about his good old days, driving across the picturesque locations of Leh-Ladakh.

Jassie informs, “When Navjit shared the composition, I really loved it and was quite excited to know that it will be shot across Leh-Ladakh which turned out to be a unique and memorable experience. I loved the way my character has been conceived and presented on screen. It looks visually appealing. I hope the audience also loves my new avatar in the song.”

Commenting on his association with the multi-talented singer-actor-lyricist-performer, Bhushan Kumar says, “Allah Ve is a nice, soothing number that provides a refreshing change to the listeners and fans of Jassie Gill. Our first collaboration, Dill Ton Blacck, also featuring Badshah, was well received by music lovers. I’m excited to see the response to Allah Ve.”

Director Navjit Buttar adds, “Jassie and I go back a long way. When I used to work as a photographer during the initial years of my career, Jassie had approached me to make his portfolio. Jassie is a talented actor and singer and he has done a great job. Shooting at different locations in Leh-Ladakh was quite challenging in terms of climate, since it was raining and it was also difficult to breathe at certain places. But I’m really happy that the song has turned out so well.”