Cinematographer-director KV Guhan’s bilingual movie “WWW” featuring Adith Arun and Shivani Rajashekar in lead roles has created groovy expectations for its title and story premise. Now, the team is delighted to have the new single titled “Minnalai Edhire”, which was  unveiled by Hiphop Adhi, the music director of chart-topping numbers this evening (June 8, 2021) 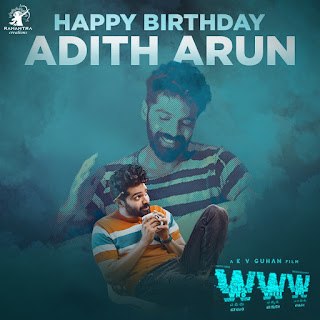 Director KV Guhan says, “It’s a melodious number based on a couple in lockdown, expressing their emotional feelings virtually through computers. Simon K King is far-famed for churning out commendable melodies and he has done a beautiful job here. I am confident that Minnalai Edhire will be loved by universal crowds. I thank Hiphop Adhi for his kind gesture of releasing this song.”

Posted by PadmaSabari at 21:37
Email ThisBlogThis!Share to TwitterShare to FacebookShare to Pinterest