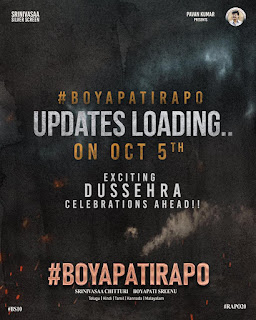 The makers' surprising announcement today took social media by storm. Fans and audiences are eagerly awaiting for the film updates. To the excitement of the fans, the makers have announced that massive updates will be unveiled on Dussehra festival day, October 5th.

Fans are overjoyed with the news and are looking forward to the festival. This massive combo appears to be poised to heighten the festival celebrations.

Boyapati Sreenu has come up with a superb story loaded with mass elements that has thrilled both the producer and the actor. The yet-to-be titled movie will be made on a lavish budget and high technical standards by Srinivasaa Silver Screen and is said to be a story with a lot of mass appeal. Pavan Kumar is presenting the film.