Natasimha Nandamuri Balakrishna and mass director Gopichand Malineni’s highly anticipated film #NBK107 gets an intense and powerful title. The crazy project in this crazy combination is titled Veera Simha Reddy. The title was launched in a massive way. The makers released a 3D title poster on Konda Reddy Buruju in Kurnool. 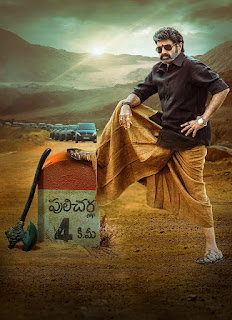 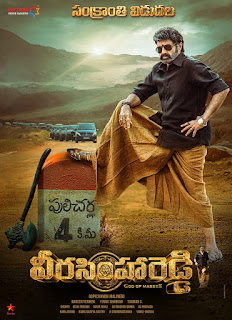 Veera Simha Reddy is an apt title for the mass-action entertainer. Curiously, the majority of Balakrishna’s films with ‘Simha’ in them ended up as huge blockbusters. Like the title, the poster is also very impactful, presenting Balakrishna in a ferocious avatar. A roaring lion can be spotted in the title logo that also sees Balakrishna’s character poster.

Lungi-clad Balakrishna is set for the big hunt with a specially designed weapon and the milestone reads, Pulicherla 4 Kms. The title poster surely increases the buzz around the movie which is already making enough. The first look as well as the first hunt received a humongous response.

Shruti Haasan is playing the leading lady in this project that is being made on large scale under Mythri Movie Makers. The movie also stars Duniya Vijay, and Varalaxmi Sarathkumar are the ensemble cast.

Music sensation S Thaman who is in superb form of late and delivered blockbuster albums to both Balakrishna and Gopichand Malineni for their last respective films helms the music of Veera Simha Reddy. Rishi Punjabi is taking care of cinematography.

Naveen Yerneni and Y Ravi Shankar are producing the film, while acclaimed writer Sai Madhav Burra has provided dialogues. National Award-Winning Craftsman Navin Nooli is handling editing and AS Prakash is the production designer. Chandu Ravipati is the executive producer for the film that has fights by Ram-Lakshman duo.

Veera Simha Reddy is set for a grand release worldwide for Sankranthi, 2023.

Posted by PadmaSabari at 21:34
Email ThisBlogThis!Share to TwitterShare to FacebookShare to Pinterest