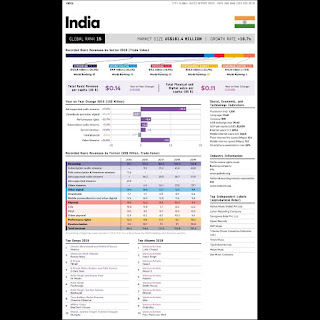 Since the last couple of years, there has been one musical artist who has made sure that she makes a place in everyone’s hearts with her soulful voice and that is none other than Dhvani Bhanushali.

The songstress started her career with songs from movies like Welcome To New York and Veere Di Wedding in the year 2018. From this to other hit film songs like Dilbar from Satyameva Jayate, Duniya from Luka Chuppi, Bekhayali from Kabir Singh, Psycho Saiyaan from Saaho and Nachi Nachi from Street Dancer 3D, she has established herself as one of the most sought after playback singers in the industry.


Not only this, apart from hit movie numbers, Dhvani has also garnered a humongous fan following through the success of her single songs like Leja Re, Vaaste, Na Ja Tu and the latest one Jeetenge Hum.
The tracks have been a constant on every playlist and crossed millions and millions of views on YouTube. 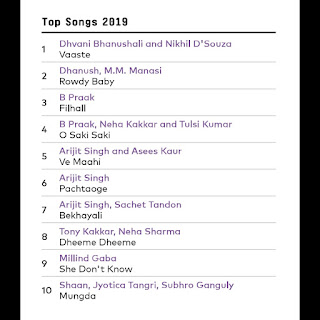 Now, a report generated from the Indian Recorded Music Industry Revenues (IFPI GMR - 2020), an organisation that represents the global recording industry, states that Dhvani’s single Vaaste is the number one song of 2019. The track which released last year to a rave reception and over 786 million views, is at the top of the list. It is no surprise that the artist has become a household name thanks to her immense talent and ability to reach to the audience through her relatable music. 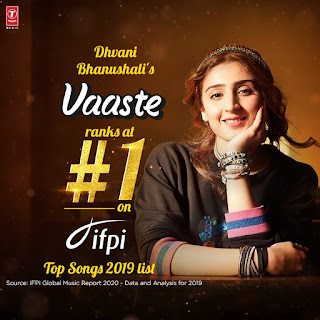 Sharing her thoughts on the same, the pop sensation says, “I don’t think it has sunk in yet. Ever since Vaaste released in April 2019, I continue to be overwhelmed by the immense love people have given it. The messages that I am still getting of how people are enjoying the song, the lyrics, the video, are mind blowing. I wanted to reach out to people but I never thought that we would come this far.”

Adding further, she says, “To be named as the top song of last year, especially since we had such amazing music come out from so many different platforms and genres, is an honour and achievement that I cherish. I promise my fans that I will work even harder now to make sure I keep making them happy with my music.”

Dhvani recently released the song Jeetenge Hum which she shot at home with her father Vinod Bhanushali. The song is dedicated to #CoronaWarriors who are bravely helping all of us to fight against the global pandemic.
Posted by PadmaSabari at 01:03