What is it that was yours and now it has become U1’s?

My Family. I feel that My family takes his side even in a fun argument. They are more comfortable with him like he is their own. So, My Family has become His Family now. 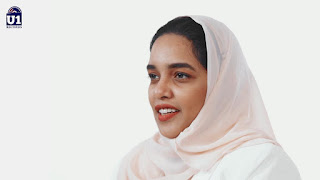 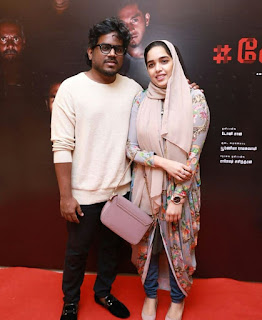 What is the Worst and Best thing about being U1’s wife?

People assume that I can sing well and have good knowledge about Music being U1’s wife, which is not the fact. It is quite the opposite. So that could be the Worst part.

The Best thing is “Music” as I get to have a first-hand experience of him creating his Music and experiencing it before everyone else.

What is the Most Ridiculous Argument you’ve had?

We have our own slang of Tamil. We argue what version of our Tamil should we teach Ziya (our daughter). I am from Keezhakarai, near Rameshwaram. Our Tamil is quite different and has the influence of Sri Lankan Tamil. We use completely unique and different words for daily used random words. He used to call my slang 'country' and I say the same to him. This is our usual frequent argument. The funny part is even my Father-in-law makes fun of our slang. This is a fun family ritual.

What would you say about this Picture?

If it was someone else, they would have felt possessive. But the situation was quite the opposite. He was the one feeling very awkward and weird about this new experience where he danced for some part of the song. I have done his styling for the song “Top Tucker”.

If you could notice his hand, it was tied in the back. That is his personality. Everything else went very smoothly. It had become a difficult task to make him look at Rashmika and act for the “Honeymoon pogalama” part of the song and it was dragged for many takes. We were cheering for him to show some romance in his face but it was hard for him. So, the situation was the other way around of what anyone could have imagined.

What is the most annoying thing ever?

Judging a Book by its cover. I like the proverb “We are the windows through which we see the whole world”.  My take on it is that if our window is dirty, the world we see will also be dirty.

Another thing is Prejudice. People judge and have stereotypes towards others, saying that there is no struggle or issues with others’ life as an unfavourable opinion.

My name is Zafroon Nizar and people assume that I speak different languages like Urdu or Hindi because of my name. The fact is that I am a Tamilian and Tamil is my mother tongue. It’s not necessarily a bad thing but this is just to quote an example.

What is something valuable that you learnt recently from U1?

Never to hold Grudges. The one thing that remained with him from the time we got married and knew each other, he always stays calm and collected. He neither reacts immediately nor gets frustrated easily. He always stays calm during a crisis or during a stressful situation. He never let such things get into his head. He always remains positive. At first, I was curious about how someone can be like this, but I am trying to learn the trait as I am spending more time with him. I am learning to understand that it is fine to be indifferent in certain things.

Who is your Favourite Music Director?

What is a song of U1 that had a big impact on you?

There is a song from the movie Paeranbu called “Sethu Pochi Manasu”. The song starts with a depressive note but it takes you through a journey and ends in a very positive way. At the end of the song, it revives Hope.

One of the most famous songs from the movie Pudhupettai, “Oru Naalil Vazhkai”. The song is my favourite and a go-to song.

Currently, there is a song from the Upcoming movie “Maa Manidhan” called “Ey Rasa”. This is a Truly Inspiring song. It is a motivating song that celebrates life. This could be the next “Oru Naalil Vazhkai” song and I am very excited about this song.

What is one little secret that would excite U1’s fans?

He is planning to collaborate and work with lots of Independent Talents and Artists under his record label, U1 Records. This is the one main reason for starting U1 Records.

In U1 Records, we are trying to create a platform for his fans and talents to stay connected with him. There are lots of things in the pipeline which would be exciting for his fans.

What are the Innocent mistakes that U1 made?

There is a sweet child in him that not many people are aware of, which is known only to people close to him. When he is comfortable with someone, be it friends or family, he makes fun of him and at times bullies them in a fun light spirit. But at times he tends to go overboard unintentionally and that is his innocent mistake.

What is the funniest thing you have seen U1 do?

There is a lot and it is hard to pick one. During lockdown, when we were all stuck at home, he was trimming his hair style with the Trimmer. I heard him scream my name and I ran to his aid. I was in shock when I went to check on him. By accident, he took off a whole chunk of his hair and a patch was gone. It was a very funny moment. Then we had to trim all his hair down to that level and he looked almost bald. He had that look for about 2 to 3 weeks.

Can you be charged for possession of Drug?

Of Course, as it is U1 himself. He is called by that name as his fans say that his music is like a Drug. If that is the case, I am guilty of possession of 70 kg of drugs in our house. He is not just a Drug; he is my vitamins and my Essential Nutrients.