The massiest local street song ever with the massiest and rugged dance moves from Natural Star Nani’s most awaited Pan India film Dasara will be released on Dasara. The song Dhoom Dhaam Dhosthaan scored by Santhosh Narayan will see the amazing dances of Nani, alongside his buddies in the coal mines. 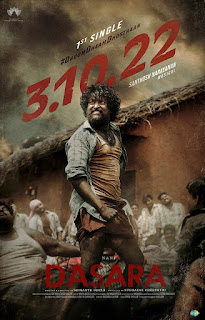 A poster from the song is out now and Nani’s raw and rustic get-up is beyond the imagination. We can conclude the ruggedness of the character, through his look. Sporting messy hair with a beard and dressed in a lungi and open shirt with banyan inside, Nani flashes a million-dollar smile.

Srikanth Odela is debuting as director with the movie being mounted on a large scale by Sudhakar Cherukuri under the banner of Sri Lakshmi Venkateswara Cinemas. National Award-Winning actress Keerthy Suresh is playing Nani’s love interest in the movie.

Samuthirakani, Sai Kumar and Zarina Wahab are the important cast of the film that will have music by Santhosh Narayanan with Sathyan Sooryan ISC handling cinematography.

Navin Nooli is the editor and Avinash Kolla is the production designer of the film, and Vijay Chaganti is the Executive Producer.

The film Dasara will be released in Telugu, Tamil, Kannada, Malayalam and Hindi languages on 30th March 2023.

Posted by PadmaSabari at 23:18
Email ThisBlogThis!Share to TwitterShare to FacebookShare to Pinterest