Akkineni Naga Chaitanya is taking part in the shooting of his upcoming film with leading filmmaker Venkat Prabhu, tentatively titled NC22. The stellar cast was announced few days, which delighted Naga Chaitanya fans and raised expectations for this action entertainer.

Now the latest update is that the film, which went on floors recently, has finished a key schedule in Mysore. During this schedule, key scenes involving Naga Chaitanya were shot. The team completed this schedule in the picturesque locations of Mysore. 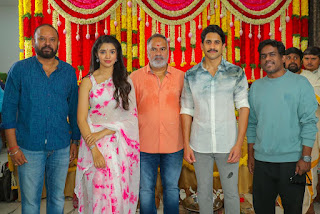 Naga Chaitanya will be seen in a completely different avatar in the movie and is also the most expensive film in the career of the Akkineni hero. The legendary father-son duo Maestro, Isaignani Ilaiyaraaja and Little Maestro Yuvan Shankar Raja are all set to tune the songs for this movie.

Srinivasaa Chitturi is producing the film in a prestigious manner on the Srinivasaa Silver Screen banner. Pavan Kumar will be presenting this ambitious project. Abburi Ravi Penning the dialogues while SR Kathir is handling the cinematography.

Posted by PadmaSabari at 23:04
Email ThisBlogThis!Share to TwitterShare to FacebookShare to Pinterest