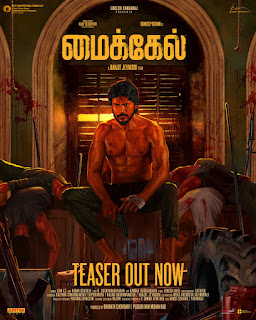 The teaser digs into revealing important glimpses of Michael. Also, it gives an insight into Vijay Sethupathi’s character as well as Gautham Menon’s villainous streak. More importantly, the story dates back to the 80s, going by the get-ups of the actors, and the set-ups in the background.

The teaser begins with intruding the three prominent faces of the movie, and the master says, “Michael, animals that can't hunt, get caught by predators,” and pat comes the reply from Michael, who says, “There is no need to wander outside to placate starvation, Master.”

From rugged dashing avatars of Sundeep Kishan, Vijay Sethupathi, and Gautham Menon, to spectacular action episodes, to intense dialogues to steamy romance, the teaser looks promising and the film seems to be a complete entertainment package with an epic storyline.

The teaser also shows some mysterious elements like the legs of a kid, its portrait, and a godman. Sundeep Kishan shows off his wild side, as the action sequences are designed in a jaw-dropping manner. Transformed himself into a beast mode, Sundeep Kishan flaunted his chiselled physique and looked dashing in the video.

The romantic track is as intriguing as the action part, and the teaser also shows a lip-lock sequence between Sundeep Kishan and Divyansha Kaushik. Vijay Sethupathi terrifies with his menacing look and power-packed screen presence. Gautham Menon appeared like a monster. The teaser also shows glimpses of actors Varalaxmi Sarathkumar, Varun Sandesh, and Anasuya Bharadwaj.

Ranjit Jeyakodi transports us to a different world with his unique way of storytelling. Kiran Kaushik’s breathtaking visuals and the exhilarating background score of Sam CS make the narrative extra engaging. The production design of Karan C Productions LLP, and Sree Venkateswara Cinemas LLP is top-notch. The dialogues for the movie were penned by Tripuraneni Kalyan Chakravarthy, Rajan Radhamanalan, and Ranjit Jeyakodi.

The film will be released in Telugu, Tamil, Kannada, Malayalam and Hindi languages.

Posted by PadmaSabari at 21:42
Email ThisBlogThis!Share to TwitterShare to FacebookShare to Pinterest