Hansika is playing a double role in the new movie “Gandhari” directed by director R. Kannan.

Hansika is playing a double role in the new movie “Gandhari” directed by director R. Kannan.

Produced and directed by R. Kannan, Hansika is playing the lead role in dual roles for the first time. 'Gandhari' will be a popular movie in the line of 'Kanchana'. 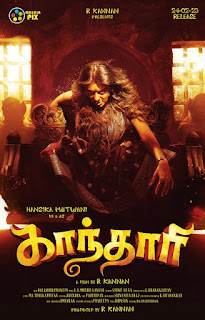 Director R. Kannan directs with emphasis on the heroine. It will be an emotional, horror based comedy thriller.

Hansika and Metro Shirish, Myilswamy, Thalaivasal Vijay, 'Aadukalam' Naren, Brijita, Pavan, etc. have played important roles. The shooting of the film has been completed non-stop. Director R.Kannan has directed all kinds of stories like #Jeyamkondan, #kandenkadhalai, #settai, #ivanthanthiran. and has been giving quality hits in Tamil cinema. Currently he is ready to direct and release the Malayalam super hit #GreatIndianKitchen in Tamil. A Mumbai production company has produced it. In this, Aishwarya Rajesh has played the heroine. After this, he has directed the film #Kasethankadavulada starring Mirchi Siva, Yogi Babu, Karunakaran and Priya Anand.

Posted by PadmaSabari at 05:14
Email ThisBlogThis!Share to TwitterShare to FacebookShare to Pinterest