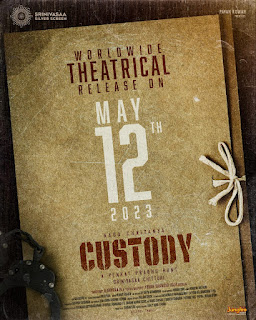 Naga Chaitanya and talented maker Venkat Prabhu’s Telugu-Tamil bilingual movie Custody is being mounted with rich production values and first-class technical standards and one of the most expensive movies in Naga Chaitanya's career. Srinivasaa Chitturi is producing this large-scale commercial entertainer on Srinivasaa Silver Screen banner, while Pavan Kumar presents it. Krithi Shetty is the leading lady opposite Naga Chaitanya.

The makers released the title and the first look poster of the movie for Naga Chaitanya’s birthday and they got an overwhelming response. Naga Chaitanya’s ferocious avatar as a police spellbound one and all.

Meanwhile, the film’s release date has been announced. Custody will release worldwide in a grand manner on May 12, 2023, to capitalize on the long summer holidays. The movie will have a simultaneous release in Telugu and Tamil.

Aravind Swamy is playing the antagonist in the movie, where Priyamani, Sarathkumar, and Sampath Raj will be seen in pivotal roles.

The movie has music by the legendary father-son duo of Isaignani Ilaiyaraaja and Yuvan Shankar Raja.

Posted by PadmaSabari at 23:09
Email ThisBlogThis!Share to TwitterShare to FacebookShare to Pinterest