Thank you Darling. You believed in my international recognition when I myself didn't" replied S. S. Rajamouli to Prabhas

*"Thank you Darling. You believed in my international recognition when I myself didn't" replied S. S. Rajamouli to Prabhas as the superstar wished the director for his great win*

Prabhas is indeed one of the most bankable stars of the Indian entertainment industry. After the superstar has delivered the most successful franchise Baahubali with the director S. S. Rajamouli, his stardom has created examples of its success. While the film was a cinematic wonder from the actor-director duo, the bond of their friendship was often witnessed from time to time which was recently been seen when the actor wished the director on his big win. 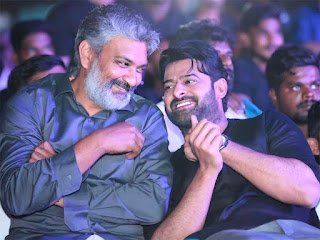 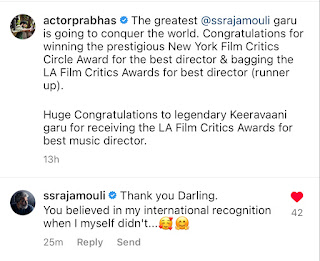 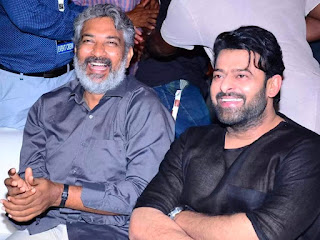 Having seen this adorable wishes from the actor, S. S. Rajamouli replied -

"You believed in my international recognition when I myself didn't...🥰🤗"

Recently we have seen Prabhas's Baahubali was two of the oldest film that made its name in the top 10 most-liked Hindi theatrical films as per Ormax media report. Moreover, the relationship of this actor-director duo has always been seen by the audience and they also never leave a chance to cherish it.

Meanwhile, the actor will be next seen in films like Spirit, Salaar, Adipurush next to Kriti Sanon, Project K with Deepika Padukone and Sandeep Reddy Vanga's Spirit. His lineup is very exciting and India is patiently waiting for his film to hit the theater.

Posted by PadmaSabari at 08:47
Email ThisBlogThis!Share to TwitterShare to FacebookShare to Pinterest