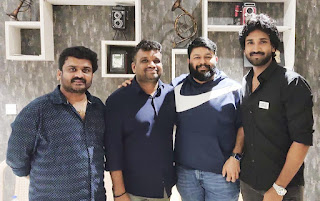 Director Arivazhagan carved a niche of excellence in the Tamil film industry with his debut movie Eeram. Far-famed for crafting thriller movies laced with his unique signature of riveting screenplay, he has delivered many blockbuster hits. He is now kick-starting a new journey as a producer with Sabdham, which has Aadhi playing the lead role. It is noteworthy that he garnered phenomenal reception for his performance as  protagonist in Eeram.

Music director Thaman, who composed music for Eeram, is scoring music for this movie.

Apart from wielding megaphone for this film, Arivazhagan is penning the screenplay as well. Sabdham will be a spine-chilling horror thriller and will be completely different from Eeram.

The crewmembers of the film attended the launch, which was a ritual pooja ceremony. While Aadhi performs the lead role, the announcement on others in the cast and technical crew will be out soon.

Posted by PadmaSabari at 20:49
Email ThisBlogThis!Share to TwitterShare to FacebookShare to Pinterest