Entries are invited from Tamil Film Producers for the Tamil Feature Film Competition of 18th Chennai International Film Festival. Films that are censored between 16th October 2019 and 15th October 2020 (both the dates are inclusive) are eligible for selection process for the competition. 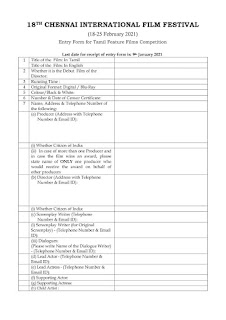 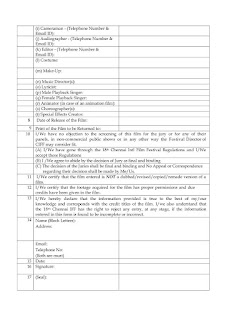 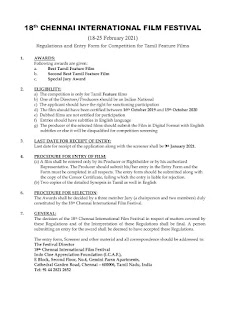 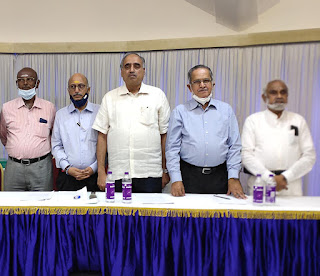 1.The entry forms are available at our website icaf.in and also with

3.The form should be submitted along with two copies of English subtitled DVD of the film entered.

Regulations and Entry Form for Competition for Tamil Feature Films

Following awards are given:

1.The competition is only for Tamil Feature films

One of the Directors / Producers should be an Indian National

The applicant should have the right for sanctioning participation

3.Dubbed films are not entitled for participation

4.Entries should have subtitles in English language

5.The producer of the selected films should submit the Film in Digital Cinema Package (DCP) Format with English Sub-titles or else it will be disqualified for competition screening

Last date for receipt of the application along with the screener shall be the 9th Jan 2021.

*4) PROCEDURE FOR ENTRY OF FILM*

(a) A film shall be entered only by its producer or right holder or by his authorized Representative. The producer should submit his / her entry in the Entry Form and the Form must be completed in all respects. The entry form should be submitted along with the copy of the Censor Certificate, failing which the entry is liable for rejection.

The entry form, Screener and other material and all correspondence should be addressed to: