The appreciation for the short film SECURITY has been truly global. The audience across the globe have widely appreciated and loved the film.

The film has been screened  at several film festivals across various continents. Not only has it won the hearts of the viewers the film has also garnered the best actor awards for its lead actor UDHAYA 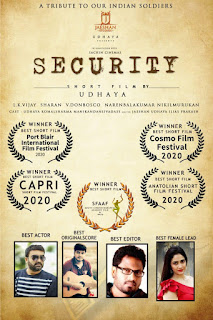 The film was selected and screened at the following film festivals

The team of SECURITY is delighted to share this wonderful news to all our supporters and well wishers.

It motivates us to come up with supreme quality content in the future as well.