Master Anish*, a 12-year-old, was referred from Bangalore with renal failure and had been on dialysis three times a week. Doctors in Bangalore had diagnosed him with a rare genetic disorder called Primary Hyperoxaluria (PH) type- II, which is a liver condition that results in accumulation of oxalate in the kidneys, heart and bones and other organ systems of the body. As the disease is primarily based in the liver, these patients need combined liver and kidney transplantation for cure which is a major undertaking, especially in a child. 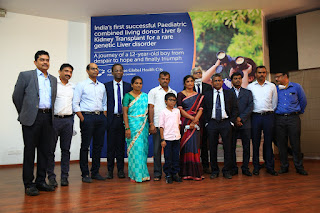 Across the world, there are only two reported cases of this treatment and this has never been reported from Asia. The family was apprehensive about two major surgeries at one time and contacted GGHC’s liver transplant team for a second opinion and decided to get treatment at GGHC, Chennai.

Elaborating about the case, Dr Somashekara, Consultant Paediatric Hepatologist and Liver transplant Physician, Glenealges Global Health City, Chennai, said, “It was a great challenge addressing this paediatric case as there are no proven studies reported elsewhere. This successful multi-organ transplant gives hope for many such patients across the globe.”

Speaking about the surgery, Dr Mettu Srinivas Reddy, Director of Liver Transplantation & Hepatobiliary Surgery, Glenealges Global Health City, Chennai, said, “Combined live donor liver & kidney transplant surgery involves a team of over 20 liver & renal transplant surgeons. It is like a large symphony orchestra where the timing of the two donor operations and the child’s double transplant surgery was carefully coordinated so that the out-of-body time of both the donated partial liver and kidney was kept to a minimum while ensuring both organs are safely transplanted.”

The Renal transplant team lead by Dr P Muthukumar, Senior Consultant – Nephrology & Renal Transplant Physician and Dr K Muruganandham, HOD & Senior Consultant – Urology and Renal Transplantation, Gleneagles Global Health City, Chennai added, “On arrival, the patient was dependent on dialysis 5 times a week and had severe anemia. As high levels of oxalate can increase heart complications during such major surgery, the child was put on a high intensity dialysis therapy to prepare him for the surgery. All blood transfusions had to be timed during dialysis to prevent fluid overload. Kidney transplant in children is complicated as a full adult kidney should be placed in the pelvis of the child. His mother was tested to make sure that she doesn’t have the same genetic problem as Anish*. We proceeded with her as a donor after extensive multidisciplinary discussion as the safety of the donor is always paramount in living donor transplantation.”

Dr Karnan, Head of Paediatric Intensive care, Gleneagles Global Health City, Chennai said,”Varun was closely monitored in the liver intensive care after surgery. Dialysis was continued for 3 more days after surgery to control the levels of oxalate in his blood. Both organs also need careful monitoring for rejection so that treatment can be started immediately. He was discharged from the hospital on the 16th day post-surgery and is doing very well. Both his mother who donated the kidney and his aunt who donated part of her liver recovered completely and were discharged within a week after surgery.”

Congratulating the team on the success, Dr Alok Khullar, CEO - Gleneagles Global Health City, Chennai, said “The determination of both donors and their resolve supported by the extended family to save the life of this young boy motivated the entire team of GGHC to do their best.. The multi-disciplinary approach coupled with technical expertise helped us to ensure the success of the surgery despite various challenges.”
Posted by PadmaSabari at 02:10