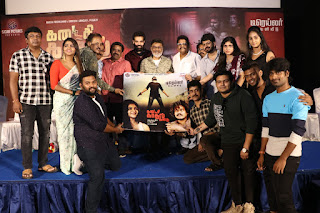 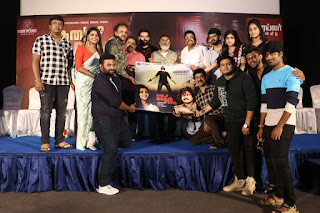 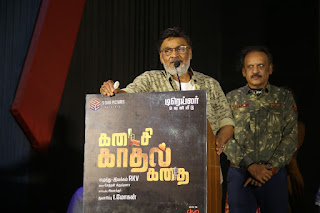 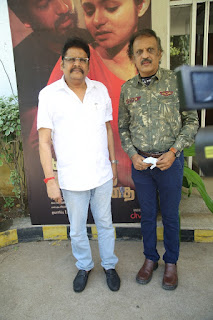 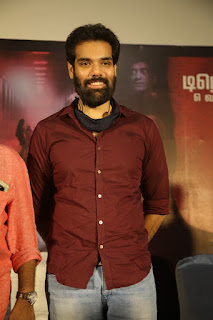 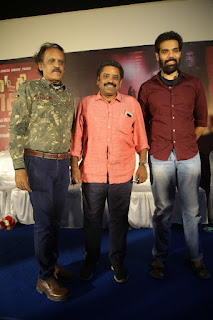 The trailer launch of Kadaisi Kadhal Kadhai starring Akash Prem Kumar, Enakshi Ganguly and Pugazh in the lead roles happened this morning in Chennai. The film is produced by E Mohan of S CUBE Pictures and is written-directed by RKV.

Director RKV said, "I always desired to write script like K Bhagyaraj sir. And the next one that I deeply admire is KS Ravikumar sir. Even when Iade my directorial debut in Kannada movie industry, all that they asked me there was if I would be able to complete the film successfully like him on promised deadline. Sibiraj is more like his father Sathyaraj as he is very humble and good in communication. We will be soon working together in more movies. Akash Prem Kumar has played the lead role and has done a good job. I had to complete the shooting in just 19 days, and he cooperated a lot. He is already well trained by director Bala while working with him for the film Varma. Even then, he took part in the rehearsal workshop session that helped as complete the shooting on time. I thank the entire cast and crew of this film for being supportive. We are looking forward to the theatrical off this film and will be announcing the release date soon "

Actor Sibiraj said, "Whenever I am running short off proper scripts to choose, my father would always suggest me to approach RKV sir as he would have plenty of scripts. When it comes to Akash Prem Kumar, he is very expressive in the songs. I wish him all the best for the success of this film."

Director Seenu Ramasamy said, "My friendship with RKV dates back to 20 years. He is someone, who never runs short off scripts. He is highly talented and positive. These days, Tamil cinema has started witnessing the good times as the OTT platforms have started welcoming content driven plots with newcomers in the lead roles. I wish the entire team for the grand success of this film."

Actress Shamu Shalini said, "I thank the entire crew and director RKV sir for inviting me for this special occasion. I am confident that the film will br very well received by the audiences."

Actor Chaams said, "When RKV sir approached me for a role, he told me that my call sheet is there only for 2 days. However, I was surprised with the way he shot. He is completely a producer friendly and shot so many footages in a short span. The entire travel with this film has been enjoyable and I am happy to have been a part of this film."

Actor Akash Prem Kumar said, "I thank press and media for supporting for this occasion. I am a great fan of KS Ravikumar sir and am so happy that he is here to grace this occasion. Director RKV sir has given me a great opportunity to be a part of this film, and I thank him for it. Mime Gopi sir, my friend Aashiq, Pugazh brother have done their best. I thank Director Bala sir for mentoring and introducing me with his movie Varma. I request press and media friends to support this film."

Director KS Ravikumar said, "I have shared a good bonding with RKV sir for 4-5 years and he is still in my story discussion group. The director is a multi-faceted personality and he is a master of quickies. I wish him a huge success and I make my advance congratulations towards the entire team for the grand success of this film."

Director-Screenwriter K. Bhagyaraj said, "I am happy and glad to see that movies are getting crowds in the theaters. At the same time, I am getting depressed looking at few movies. Few bad content films getting good response is disappointing me. I request media and audiences to support good movies alone or else such success will prompt the filmmakers to make such films. I heard director RKV stating that he had changed his name after consulting astrologers, but he neednt do this. This is because, he is such a talented director who has thousands of story written and kept ready. He can just believe and trust his hard work alone."

Posted by PadmaSabari at 08:04
Email ThisBlogThis!Share to TwitterShare to FacebookShare to Pinterest