Accepting the award, Mega Power Star Ram Charan was quick in letting those in attendance know that while he is on the board of the Chiranjeevi Blood Bank and has undertaken many of its activities, it was the brainchild of his father, Megastar Chiranjeevi and dedicated the award to him. He quipped at how his father had advised him to take care of his support staff rather than his producers and directors when he was off to make his first movie in 2007, always stressing humanitarian values and inculcating those qualities in him. 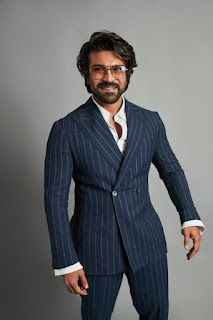 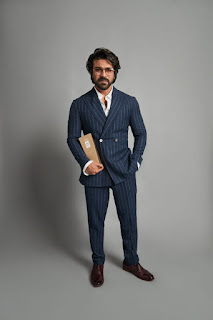 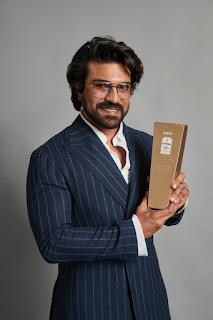 Ram Charan went on to recall the incident that led to his father starting the noble initiative - that back in 1999, despite advancements in medicine and technology, one of his very close relatives had lost his life during surgery due to blood not being available timely. This led his father starting the Chiranjeevi Blood Bank and appealing to his scores of adoring fans to start donating blood. His father further incentivized it by announcing to his fans that they would get a free photograph with him for each unit of blood donated.

The event organizers even recalled Chiranjeevi and Ram Charan helping over 75,000 film workers affected during the Covid pandemic-induced lockdowns. While this further underscores his father's humanitarian and philanthropic values, Ram Charan thanked the film industry without whose support this initiative would not have been possible.

Moving on to lighter topics, Ram Charan added on the healthy camaraderie he shared with his father. When SS Rajamouli visited his house to narrate the script of Magadheera to Ram Charan, the director insisted on Chiranjeevi listening in as well. Ram Charan hilariously recalled how his father listened to the script so intently as though he were starring in the film. Fast forward to the present where Ram Charan has been in the industry for 15 years and is working on his 15th film. Ram Charan used this occasion to thank his father for having come this far -  something that he has usually avoided till now being wary of critics starting the nepotism debate - and emphasized on everyone being grateful to their parents and putting differences aside.

He is went on to add the example of his father's relationship with his grandfather who was a police officer in Nellore. Needless to say, Chiranjeevi had a very strict upbringing. The Megastar had told his father that he is going to Chennai to become a Navy Officer while he was actually going there to attend acting school. Ram Charan recalled his father telling him upon his grandfather's passing, that he had regretted not spending enough time with him and didn't want him to have the same regret. Ever since, the father-son duo has been putting their differences aside very quickly, reconciling and ensuring they spend enough time together as a family. Ram Charan said that it was this magnanimous quality of this father which ensures the well-being of his family and his staff, which has been extended to the public at large through the Chiranjeevi Blood Bank.

Lastly, on RRR, Ram Charan credited the roaring success of the film to the sincere and honest efforts of all those involved in its making. He likened RRR to films like Dangal and Taare Zameen Par which are well-rooted in India and do not make any attempt whatsoever to copy Hollywood movies. Ram Charan said that RRR has proven to be a gleaming example of a film that stays true to India and that the world is waiting to see more such film.

Posted by PadmaSabari at 21:14
Email ThisBlogThis!Share to TwitterShare to FacebookShare to Pinterest