It may seem like a matter of yesterday when ace filmmaker Sanjay Leela Bhansali's iconic film Padmaavat released on theatres. The film, which brought magic to the silver screen was not just about the story but the vision of Sanjay Leela Bhansali and the music which enchanted everyone from its first chord.


Padmaavat had it all, the story, the onscreen the epic performances, the lead cast of Deepika Padukone, Ranveer Singh and Shahid Kapoor, the music and emotions which gave every movie lover an unforgettable experience. 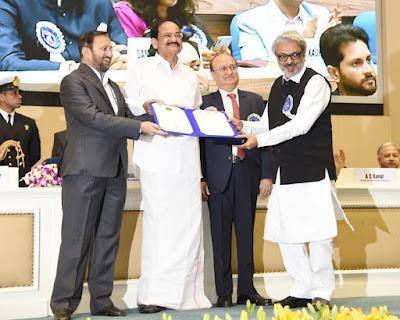 The impact of a stellar film resonated loud and clear in the hearts of the audience. The film went on to win not one but three National Awards. It took home the honour of National Film Award for Best Music Direction, Best Male Playback singer and Best Choreography.
The film, which went on to break box office records and make has been till date the maestro filmamker Sanjay Leela Bhansali's biggest grossing film.
It was not just in India, that the film made an impact, Padmaavat was also the first Indian film to make box office shattering numbers worldwide.
It doesn't come as a surprise that the film continues to be remembered as one of the most iconic films in current times.
Posted by PadmaSabari at 23:48