Priya Bhavani Shankar gets onboard for STR-

Actress Priya Bhavani Shankar has been signed to play the female lead role in STR-Gautham Karthik starrer “Pathu Thala”. While the recent announcement about the film’s title had created a huge sensation, this is an additional emblazonment to this power-packed star-cast. Director Obeli N. Krishna says, “The character played by Priya Bhavani Shankar wouldn’t be a blink and miss role, but will have lots of substantiality. 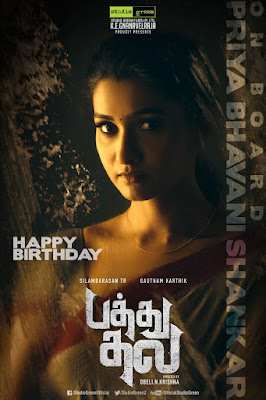 Although she will be playing Gautham’s pair, her character as Tehsildar has its own conflicts and drama. It wouldn’t be a run-of-the-mill role and audience will definitely like it.  We are planning to kick-start the shooting by March 2021 and will be wrapping up in a shorter span.” The makers are busy now finalizing the actors and technicians and will be revealing the complete list soon.