"Iyakkunar Sikaram"  Sri. K. Balachander’s 91st birthday is being celebrated on Clubhouse on July 9th at 7 PM in a grand way 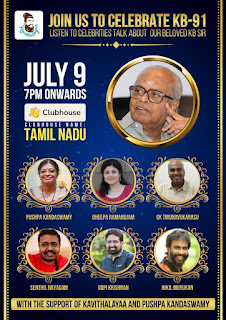 This program is being organized by people who have traveledwith K.B Sir closely, with the support of Kavithalayaa and Mrs. Pushpa Kandaswamy.    The organizing team consists of Dheepa Ramanujam, Senthil Nayagam, GK Tirunavukarasu, Gopi Krishnan, and Nikil Murukan.  Dheepa Ramanujam will be hosting the show.