SIDDHARTH TALKS ABOUT THE MEANING OF

SIDDHARTH TALKS ABOUT THE MEANING OF INMAI

The word Inmai means - deprivation or lack of something. Filmmaker Rathindran Prasad has helmed Inmai (emotion - fear) in Navarasa. Versatile actor Siddharth who has predominantly worked in the South & Hindi film industry is all set to mesmerize the audiences with his performance in Inmai, which is a part of Netflix’s upcoming nine-part anthology film Navarasa. The upcoming Indian anthology ‘Navarasa’ features some of the greatest talents from the Tamil film industry. Navarasa will premiere worldwide on Netflix on August 6, 2021. 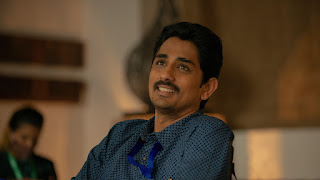 Talking about the making and working experience, popular actor Siddharth said “I was very happy and excited when Mani Ratnam and Jayandra Sir offered me ‘Inmai’. It's one of the Nine Rasas, the word means something which is not there. People's curiosity will be elevated when they hear the Word ‘Inmai’. This project ‘Navarasa’ is a step to help the film fraternity and the people involved by raising funds, who have been severely affected by COVID. It was an exciting experience working with the filmmaker Rathindran Prasad and Actress Parvathy Thiruvothu.

Posted by PadmaSabari at 05:19
Email ThisBlogThis!Share to TwitterShare to FacebookShare to Pinterest