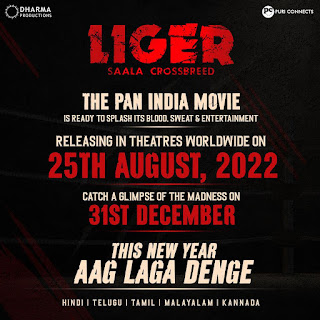 Young Sensation Vijay Deverakonda and dashing director Puri Jagannadh’s maiden Pan India project LIGER (Saala Crossbreed) that also marks Legend Mike Tyson’s debut in Indian cinema is nearing completion. They recently wrapped up a schedule in USA, where important portions involving Mike Tyson, Vijay Deverakonda, Ananya Pandey and other vital cast was filmed. Only a small schedule is pending and it will be canned in India.

The makers have dropped double surprises today. The Pan India Movie is ready to splash its blood, sweat and entertainment, as it is releasing in theatres worldwide on 25th August, 2022. In the interim, catch a glimpse of the madness on 31st December. “This Year New Year, Aag Laga Denge,” assures the makers

Liger is going to be one of the biggest action extravaganzas in India, as it deals with the subject of Mixed Martial Arts and moreover, it features Legend Mike Tyson in a mighty role. Fans and cine goers are waiting with bated breath to witness the real action on big screens. They are eager to see the breathtaking stunt sequences of Vijay Deverakonda and Mike Tyson. The glimpse is sure to offer a perfect New Year presentation for action movie lovers.

In association with Puri connects, the film is being produced jointly by Bollywood's leading production house Dharma Productions. Puri Jagannadh, Charmme Kaur, Karan Johar and Apoorva Mehta together are bankrolling the film on a grand scale.

The film in the crazy combination has cinematography handled by Vishnu Sarma, while Kecha from Thailand is the stunt director.

Ramya Krishnan and Ronit Roy play prominent roles in Liger which is being made in Hindi, Telugu, Tamil, Kannada and Malayalam languages.