India recently voiced concern over emerging threats from the realm of cyberspace and said that some countries are using cyberspace to conduct cross-border terrorism. Representing India at the United Nations Security Council’s high-level debate on ‘Maintenance of international peace and security: Cyber security’, Foreign Secretary Harshvardhan Shringla put for forward India’s concern at the growing risks to international peace and security caused by the malicious activity in cyberspace.

Speaking at the debate, which was also attended by several foreign ministers of member states, Foreign Secretary Harshvardhan Shringla without taking any names said, “Some States are leveraging their expertise in cyberspace to achieve their political and security-related objectives and indulge in contemporary forms of cross-border terrorism.” 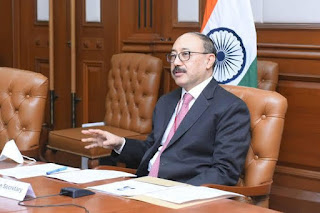 He pointed out that "terrorists have also used social media for planning and executing their terror attacks and wreaking havoc", adding, "as a victim of terrorism, India has always underlined the need for Member States to address and tackle the implications of terrorist exploitation of the cyber domain more strategically."

Highlighting the fact that democracies and open societies are particularly vulnerable to threats emerging from cyberspace the Foreign Secretary also mentioned the need to maintain integrity and security of Information Communication Technology products, which form the building blocks of cyber space.

Speaking on the need for collective action he said, “we need to adopt a collaborative rules based approach in cyberspace and work towards ensuring its openness, stability and security.”

During his address, he also listed the use of "transformative technology initiatives" like Aadhar and UPI by India to implement the Sustainable Development Goals (SDGs).

Mentioning the use of Co-WIN app, he said, "As part of its COVID vaccination drive, one of the largest such drives in the world, India has developed Co-WIN – a scalable, inclusive and open technological platform" and this "can be customized and scaled up for health interventions across the globe."