‘A film like Vikrant Rona needed a platform like Lahari Music and T-Series. They cater to a wide range of audience and are one of the best in the world right now. With both these audio companies being home to all the big budget films we’re glad to have partnered with them’, said Jack Manjunath, Producer, Shalini Artss 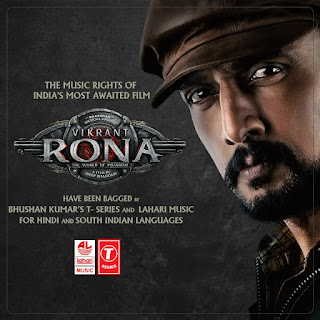 Director Anup Bhandari said ‘I am glad that the rights of Vikrant Rona has been bagged by Lahari music and T-Series. My first film Rangitaranga’s audio was also released on Lahari Music, so it’s sort of like a homecoming. They’re one the best in the music industry and I am sure this association will be a fruitful one for everybody involved.

Posted by PadmaSabari at 03:40
Email ThisBlogThis!Share to TwitterShare to FacebookShare to Pinterest