and here are five absolutely funny moments from the show

Ever since the announcement of LOL: EngaSiriPappom, viewers have been counting days to its launch. From having a mixed bag of comedians to Padma Shri Actor-Comedian Late Vivekh judging the show along with Shiva, LOL: EngaSiriPaapom on Amazon Prime Video has stayed true to its promise of being the perfect binge-watch for comedy lovers.

The show, which is currently streaming on Amazon Prime Video is an absolute laugh-riot and here are five funny moments that will have you rolling in splits:

Haarathi’sRanabella: Harathi is famous for her perfect timing in comedy. There are quite a few cute and funny characters from her films that have certainly left an impression on us. In LOL: EngaSiriPaapom, Harathi brought her A-Game with a rather special character and an even more special tune. Harathi’sRanabella - a cross-over of Rapunzel and Annabelle impressed the judges so much that they even started humming the theme song, created by Harathi for the character, by the end of the show.

Abhishek the reporter from Thoo Times: With his witty one-liners Abhishek sure did win many hearts but donning a rather special character as a reporter gave him an edge on the show. His interviews with fellow contestants in the house had him dish out spontaneous dialogues that cracked us all up. 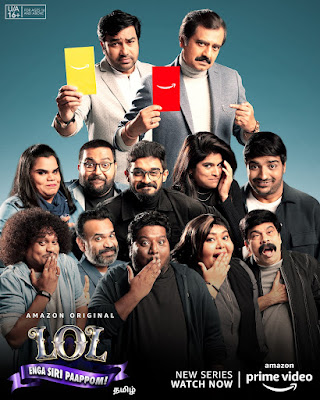 Premgi and his new musical avatar: When comedy meets music there is plenty of laughter. Marrying the best of both worlds, Premgi’s hilarious stint at playing a background score for every reaction of his fellow contestants in LOL: EngaSiriPaapom had the judges in splits and the comedians holding their laughter. This even led to a funny little sketch with Puzhal and Powerstar Srinivasan facing-off each other.

Powerstar - Damsel in distress: We have seen him don many characters but in LOL: EngaSiriPaapom brought Powerstar’s groovy side to the limelight with his special take on Cleopatra. Inspired by her, Powerstar donned a ravishing avatar and performed for his fellow contestants. This little performance by Powertstar is sure to bring instant laughter and we can't imagine how the contestants managed to stifle one or did they?

Vigneshkanth’s roast: Comedy has many forms and a roast is a sure shot at getting people to laugh. Bringing out his best, contestant Vigneshkanth roasted his fellow contestants with witty one-liners that had us laughing in splits. But for the contestants it was definitely the most challenging task. From calling out Puzhal’s famous lines to pointing to Powerstar’s antics, Vignesh’s roast did not spare anyone inside the house.

While we’ve only highlighted 5 of the fun moments from the show, LOL-EngaSiriPaapomhas spontaneous one liners, absolutely rib-tickling showtime acts and these fabulous 10 comedy entertainers - Maya S Krishnan,Abhishek Kumar,PremgiAmaren,Harathi Ganesh,RJ VigneshKanth,Sathish,Pugazh,Powerstar Srinivasan,Baggy (BhargavRamakrishnan), andSyamaHarini – a riotously funny bunch, who are going to have you in splits. A complete binge-watch treat! Do tune in to Amazon Prime Video now and give yourselves a light comic treat by watching this show.
Posted by PadmaSabari at 02:20
Email ThisBlogThis!Share to TwitterShare to FacebookShare to Pinterest
Labels: amazon prime video, avatar, enga sir paapom, haarathis ranabella, powerstar damsel, premgi, thoo times, vignesh kanth's roast