With an eye on socially relevant dramas, 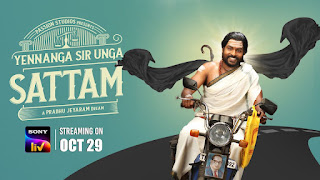 The film follows the life of JP, a middle-class man, who aspires to climb the social ladder by marrying out of his community. However, he ends up marrying a girl from his own community, eventually realising that only by taking pride in his identity and community, can he accomplish his dreams. He decides to give voice to his community by making a movie on his life. Narrating a multiple stories parallelly, that converges towards the climax, the film provides a holistic understanding of the lives of socially & economically deprived communities.

SonyLIV is the first Indian premium Video on demand (VOD) service by Sony Pictures Networks’ (SPN) providing multi-screen engagement for users on all devices. Launched in January 2013, the digital streaming player is home to 24 years of rich content from the library of Sony Pictures Networks India (SPN) with over 40,000 hours of programming. SonyLIV subscribers get exclusive access to key sporting events from across the globe, the latest Hollywood Shows, Originals, 18,000+ hours of TV Shows, LiveTV and Kids content. With 100 million+ app downloads so far, SonyLIV provides original and exclusive premium content to Indian viewers. The platform has over 150+ original shows spread across Hindi, Marathi, Gujarati and Bengali. The Tamil and Telugu library itself boasts of 2000+ hours of Movies and Originals. SonyLIV’s originals its line-up includes - Avrodh, Your Honor, Undekhi, Bhonsle, JL50, Sandwiched Forever and Scam 1992: The Harshad Mehta Story and many more.

SonyLIV has partnerships with key International studios – SPE Films, Lionsgate and iTV, which allows its subscribers exclusive access to award-winning shows like, Seinfeld, Power, The Good Doctor and Mr. Mercedes. The platform also hosts celebrated Hollywood shows to its library like LA’s Finest S2, On Becoming a God in Central Florida, Alex Rider, For Life, Lincoln Rhyme, War of the Worlds, Commons and Indebted, 1917 amongst others.

Posted by PadmaSabari at 15:26
Email ThisBlogThis!Share to TwitterShare to FacebookShare to Pinterest