After a tough outing against Jamshedpur FC last week, Hyderabad FC are back in action in the Indian Super League when they welcome Bengaluru FC to Bambolim in their second game of a packed month on Wednesday.

The Blues kicked off their campaign with a win over NorthEast United but have since picked up just one point in their last three games. They come into this game after a 3-1 loss to Mumbai City but are yet to lose a game against Hyderabad FC.

Both clashes between these sides last season ended in draws and Manolo Marquez believes that there is very little to separate the two sides this time around as well.

“But every team in the ISL is different. Bengaluru are a dangerous team in attack, and in many situations but we have to find our consistency and work hard for a win,” he added.

Hyderabad FC were not at their best against Jamshedpur FC in the last round but managed to find an equalizer and secure a point to keep the spirits high in the camp.

Bartholomew Ogbeche found the net for HFC in that game, making it two in three games for the striker. The likes of Joao Victor, Asish Rai, Akash Mishra and Chinglensana Konsham have all been in fine form so far along with Juanan, who will face his former club for the first time since making the switch. 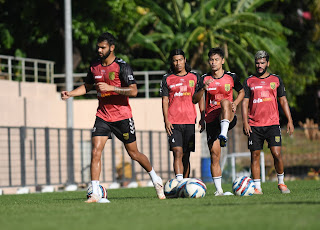 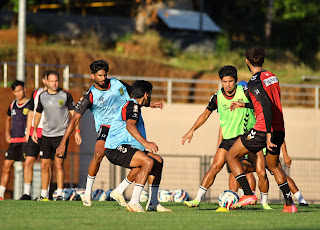 Bengaluru on the other hand have Cleiton Silva bang in form along with a solid backline and an exciting midfield. Speaking about the opponents and their strengths, Manolo said, “BFC have some big names in Indian football and also some good youngsters and they will be a tough team to face for sure.”

“Every game is very difficult in the ISL. But as a Coach it is your work to know about the other team and we will be ready for the game tomorrow,” the 53-year-old added.

Manolo also revealed that both Halicharan Narzary and Mohammad Yasir are out for this game against Bengaluru. Marco Pezzaiuoli on the other hand also has a few absentees to deal with ahead of this game with Sarthak Gouli set to miss the clash due to personal reasons.

The likes of Prince Ibara, Udanta Singh, Iman Basafa and Yrondu Musavu-King are all doubtful for this clash. But Manolo believes that Bengaluru have the quality to trouble his side in this clash.

“I really like BFC’s playing style this season. The coach is brave and has his team play attractive football. So, I am sure it will be another close game,” said the Spaniard.

Both teams have four points on board, and will look for a positive result in this clash. The game kicks off at 7:30 pm on Wednesday and will be telecasted live on the Star Sports Network with live streaming on Disney+ Hotstar and JioTV.