Did Radhe Maa Pay Rs One Crore To

Did Radhe Maa Pay Rs One Crore To Get Entry Into Bigg Boss Season 14?

As soon as news that controversial Godwoman Radhe Maa was going to be one of the contestants of the Bigg Boss show, began doing the rounds on social media, with Colors officially sharing a promo showing Radhe Maa in the Season 14 house, Goan actress and model Poonam Karekar Govekar phoned us to give us the news.

According to Poonam, she said her sources have told her that Radhe Maa has paid a huge sum of money to the makers of the show to get into the Bigg Boss house. So we asked Poonam what could be the amount. Poonam claims that in her rough estimates, Radhe Maa and her supporters could have possibly paid Colors a sum of Rs One Crore or even more to get selected as a contestant or participant of Bigg Boss. 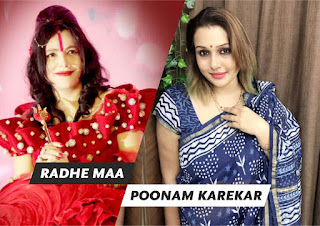 Bigg Boss is a very coveted show. Everyone wants to be part of it, because of the fantastic host Salman Khan and his inimitable style. Radhe Maa and her core group know that entering the show will up her brand image and give her millions of more fans. I am sure she must have paid the sky to be part of it, given the fact that for 4-5 years now, her name has been doing the rounds as a prospective participant.

The makers of the reality show are pulling out all the stops to ensure maximum eyeballs. A video shared on Colors’ social media pages hints that Radhe Maa is set to enter the house this Saturday.

In the video, Radhe Maa is seen going around the house. She is even heard saying that may the season become successful.

According to reports, Radhe Maa will most likely arrive on the show to bless the house and the contestants. However, given that it’s an unpredictable show, she might also be seen as a contestant. A confirmation should be forthcoming in a few days as more details get leaked.

Radhe Maa is a spiritual leader and self-styled god woman. While she is finally gracing the reality show this season, her participation has been speculated earlier too. Bigg Boss has previously seen spiritual leaders Swami Om and Sshivani Durga as contestants.

Radhe Maa has had several controversies linked with her in the past. There was a court case filed against her by a social worker and advocate in Mumbai and then the authorities were also investigating her source of income and the IT authorities were after her for various unaccounted assets including a huge bungalow in Borivli in suburban Mumbai as well as a fleet of imported cars.