CONFIRMED CONTESTANTS!! Meet The 13 Players Of Bigg Boss OTT on

CONFIRMED CONTESTANTS!! Meet The 13 Players Of Bigg Boss OTT on Voot as they  set to  turn on the heat with unmatched Over the Top entertainment

~The show will give 24x7 uninhibited access to all the

drama and entertainment from the house for 6 weeks~

~ Packed with oodles of sassiness with Karan Johar as the host, Bigg Boss OTT starting tonight will stream LIVE 24x7  as well as every  Monday – Saturday at 7:00 pm & every Sunday at 8PM ~

Ever experienced Over the Top drama, Over The Top emotions, Over The Top entertainment and an Over The Top Host? The nation’s favorite reality show Bigg Boss is just that - All things ‘OTT’ and more. The iconic show that has taken the nation by storm is all set to first launch exclusively on digital as Bigg Boss OTT and will bring to life drama, engagement and interactivity through its 24*7 high octane run for 6 weeks.

Starting tonight, the temperature inside the Bigg Boss OTT house is set to soar with an eclectic mix of 13 popular contestants waltzing their way inside the house to become a part of the biggest entertainment phenomenon in India.  The uber-cool and very chic producer, director and host Karan Johar will bring in the much-required swag and sass to the ongoings of the house while being the inmates’ only link to the outside world. Premiering on Sunday 8th August at 8 pm, Bigg Boss OTT produced by Endemol Shine India will stream LIVE 24x7. Apart from all the live-action, special episodes will stream every Monday to Saturday at 7 pm and every Sunday at 8 pm only on Voot.

With the theme of the house being  ‘Stay Connected’, the contestants and their connections will be put to test every step of the way. Not only will the viewers get non-stop access into the house, but they will also be instrumental in determining the fate of the housemates with the help of special powers bestowed upon them. Taking the engagement and interactivity to the next level, Bigg Boss OTT will empower the show’s fans and allow them to take many important decisions impacting contestants. Right from deciding the tasks, twists, surprises, punishments and even eliminations, the viewers will play an integral role in the journey of the housemates.  And the housemates are: 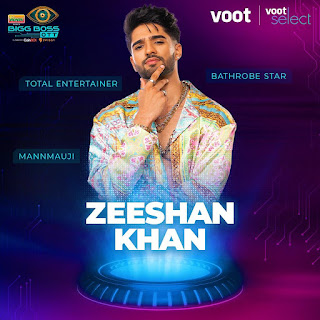 Good looks, good looks and only good looks!! Never leaving a spot to grab eyeballs of millions. Zeeshan Khan is here to entertain with  his quirky style! This Heartthrob is sure to give a tough challenge to housemates inside the house of Bigg Boss OTT!! 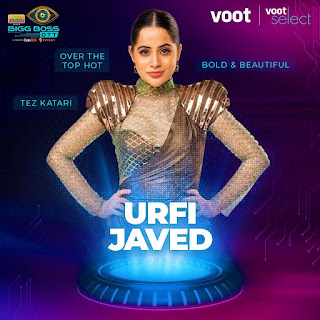 In the six years since her small screen debut in Bade Bhaiyya Ki Dulhania, Urvi has carved a niche for herself in the industry with shows like Bepanah, Yeh Rishta Kya Kehlata Hai and Kasautii Zindagii Kay. Besides her performances on TV show, she has quite a following on social media with her sizzling pictures. 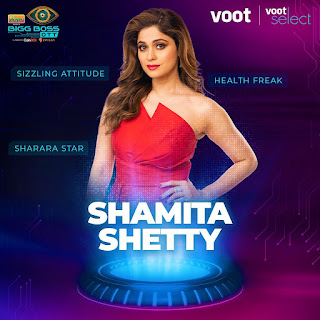 Look who’s here! None other than ... Shamita Shetty. A complete entertainer, Ms Shetty rose to fame with her debut movie Mohabatein. She then went on to  work in many more movies and also on shows like Jhalak Dikhhla Jaa. Shimata is now  geared to set the house Biggest Reality show ... Bigg Boss OTT on fire. Let’s hope she “sharara;s her her way through the next six weeks in the house. 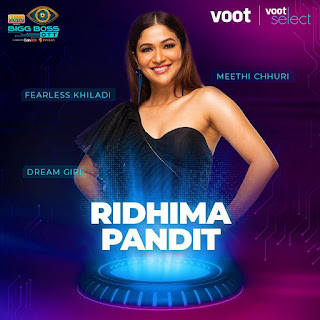 Meet Ridhima Pandit! She’s a renowned TV actress’ second time on a reality show, Ridhima fearlessly faced all the tasks in her previous show – Khatron Ke Khiladi, becoming a the second runner up. Let’s wait and watch to know her strategy for Bigg Boss OTT. 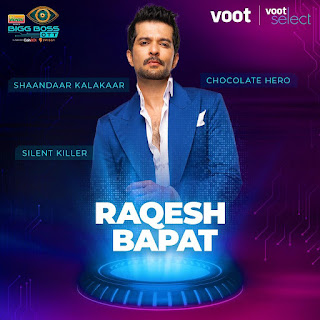 Having started his acting career with Tum Bin two decades ago, Raqesh Bapat became a popular name in the television industry due to his his numerous TV  roles. His love for art  has grown over time but only time will tell how he decides to craft his journey in the house. 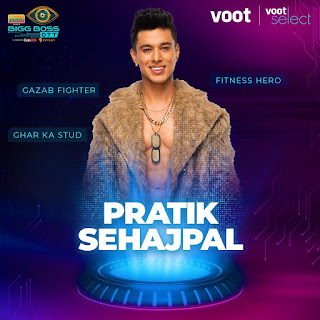 He wears many hats — of an actor, model, fitness trainer, athlete and motivational speaker. Having participated in reality shows like Love School 3 and Ace Of Space previously, it remains to be seen how Prateek plays his game in  the Bigg Boss OT house. 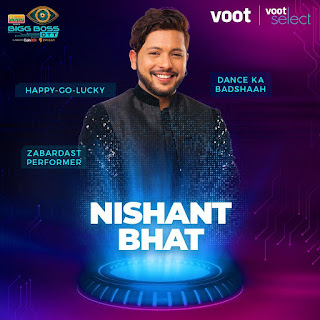 A choreographer who has been a part of several dance shows, Nishant Bhatt has also acted in a couple of serials. While his moves have made him a household name, it remains to be seen if he makes Bigg Boss OTT inmates dance to his tunes. 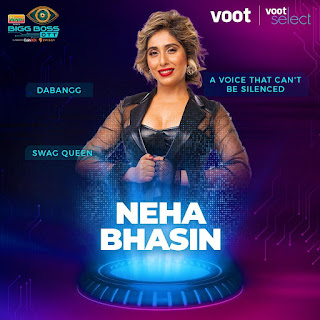 A popular singer, Neha has made the nation dance and grove to her populat songs sung  in Bollywood, Tollywood, Kollywood  movies as well as independent songs in Indian pop and Punjabi folk music. For someone who has previously  been sceptically about being locked up, the Jag Ghoomeya and Swag Se Swagar singer decided to bite the bait this time and live up to her ‘fearless’ tag. 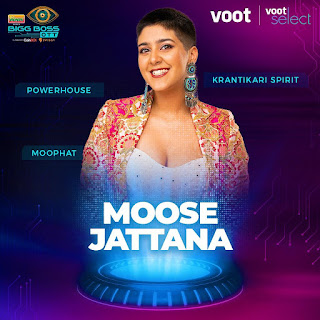 She’s more famous as Moose Jattana, an NRI from Australia who  who doubles up as a social activist. Though born and brought up in Australia, Muskan, 19, has her roots in Punjab, her journey so far has been inspiring. Do you think that her journey to glory will continue even when she is inside the house? 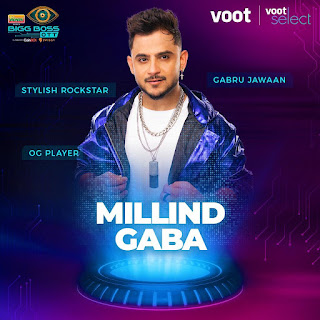 Singer, songwriter and music producer, Milind Gaba is known for his association with Bollywood and Punjabi music and hits like Nazar Lag Jayegi, She Don’t Know and Yaar Mod Do. He also forayed into acting with the Punjabi film, Stupid. Will his journey in the Bigg Boss OTT house be  as musical  has his journey in entertainment? 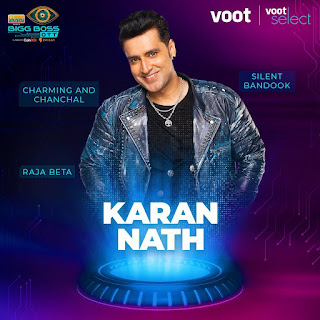 Hot! Sizzling! Karan Nath started his career as a child artiste in Mr. India (1987) and made his debut with Paagalpal and followed it up with Yeh Dil Aashiqanaa. Apart from being a part of the ensemble cast of LOC Kargil, Karan was last seen in the Hindi remake of the Tamil actioner, Polladhavan 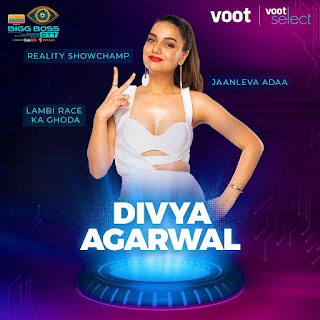 From starting her career from Karan Johar’s movie as a junior artist to being a part of several shows like Splistvilla and Ace of Space and now becoming a contestant of Bigg Boss OTT,  the queen of reality Divya Agarwal is all set  to Ace this game! 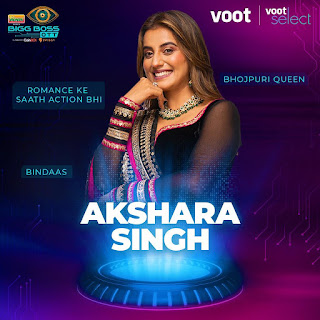 This no-nonsense Bhojpuri actress and singer doesn’t believe in mincing her words. Not pleased with the way her regional cinema is spoken about, Akshara Singh knows how to shut the ‘labar-labar’ about  the Bhojpuri entertainment industry. And though she’s done several romance movies, she asserts  that if need arises she can prove to be good in action roles too.

So, now that you know who the celebrities and influencers to be locked up in the Bigg Boss OTT House for the next six weeks are, get ready to tune in to Voot from Sunday, 8th August, 2021, 8 pm onwards. As the  sassy host Karan Johar says, “Meres saath Bigg Boss OTT ke maze loot… First time 24x7 only on Voot.”