Megastar Chiranjeevi's new film '#Chiru153' directed by Mohan Raja, grandly produced by Konidela Productions and Super Good Films has gone on floors recently in Hyderabad. Meanwhile, on the occasion of the Megastar's Birthday, the team is releasing a special update from their film. 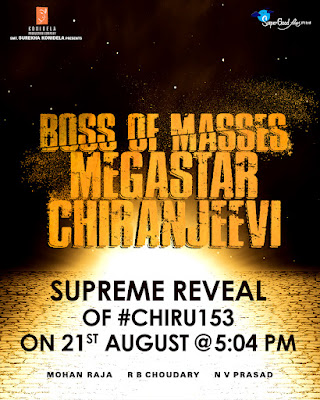 Celebrating the Boss Of Masses Megastar Chiranjeevi, the makers are going to release the 'Supreme Reveal of #Chiru153' on August 21st (tomorrow) at 5:04 PM. Fans are very excited and are saying the festival has arrived one day early for them.

Maverick Tamil Director Mohan Raja has finalized a gripping screenplay for the film. The in-form music director Thaman will be composing music for this movie. This is his time for the Megastar and the master musician is excited like anything.