Shri Shikshayatan School Triumphs at the

~ Notebook, in partnership with the IIM Calcutta Innovation Park is conducted IGNITE - an inter-school innovation challenge to find the entrepreneurs of tomorrow~

Kolkata, 19th August 2021 - The Grand Finale of Notebook Ignite – An International inter-school innovation and entrepreneurship challenge was held by Notebook in collaboration with IIM Calcutta Innovation Park. The Grand Finale witnessed 12 teams from Singapore, Nigeria, and 9 states of India. Each team presented ideas far beyond their young years and geared not only at profits but also towards creating a significant positive impact on society.

The event began on the 5th July, with schools attending a curtain-raiser where the event was announced. Out of hundreds of enthusiastic schools, 64 were shortlisted for the Qualifier Rounds. Masterclasses were conducted by Mr. Gaurav Kapoor, Chief Business Officer, IIMCIP for young learners who got a chance to learn about entrepreneurship, business planning, and pitching ideas from experts in the field. As the 64 schools participated in the Qualifiers, they were guided by eminent judges like Kaustav Majumdar, Dr. Pallavi Tak, Flo Oberhofer, Devasis Gupta, Prof. C.D. Mitra, and others. 28 teams made it to the Semi-Finals, from which the top 12 schools met at the Grand Finale held on August 15th to present their ideas. Between these rounds, students were treated to another phenomenal master class by Sunil Kanoria, Vice-Chairman, Srei Infrastructure Finance Limited, and Hon. Consul of Spain. Students interacted with the stalwart entrepreneur and discussed a wide array of topics ranging from blockchain to philosophy.

The chief guest of the event was Mr. Hemant Kanoria, Chairman, Srei Infrastructure Finance Limited. Speaking at the event, Mr. Kanoria said, “Entrepreneurship is something that everyone needs to adopt and embrace.” Speaking of his experiences, he said, “...in business, it is almost like an adventure… the thrill of getting into the particular business, on embarking on it, and taking the journey of adventure.”

The event which was sponsored by BSNL, Webel-Fujisoft-Vara Centre of Excellence, Lokdhun, and the SKC LNCT Group of Colleges witnessed school students approaching real world problems with innovative and creative solutions. 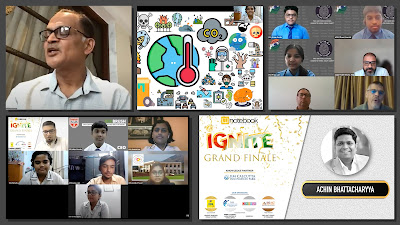 Dr. Subhrangshu Sanyal, CEO at IIMCIP, commented on the presentations, saying, “The younger we are, we are more creative… as parents and teachers, we need to do a good job of motivating and inspiring these youngsters to take their ideas forward. We always run after grades, but I think the real education is this.” Achin Bhattacharyya expressed his appreciation and gratitude to the participating schools saying, “As the rounds progressed, we saw the students fine-tune their presentation, make small changes as per advice from the judges. This ability to unlearn, this flexibility is extremely important. Entrepreneurship is an uphill climb, and the lesser baggage you carry, the more your chances of success.” Speaking of the event, he said, “I am indeed very impressed with the kind of incredible talent that I saw in our young friends. I saw active, enthusiastic participation, and students really gave it their hundred percent, which is so so important.”

At the end of the session, based on scores from the judges, and audience poll, Shri Shikshayatan School, Kolkata emerged as winners with their plan for a Super-App to empower sustainable lifestyles. Bhavan’s R.K. Sarda Vidya Mandir, Raipur, came second with MicroPa, their innovative water filtration technique that removes micro-plastics from drinking water, and close at the heels, Greenland Public School, Lucknow came third with a plan to use Advertisements printed on biodegradable plastic milk delivery bags as a cost-effective medium for SMEs to advertise their services. Schools praised the event and went on to congratulate Notebook for organizing it. “Thank you to Notebook… for the opportunity you gave our students. It was a great learning journey” wrote Global Indian International School, Singapore, while Indian Language School, Lagos said, “An extremely well-organized event. This is my second year working with Notebook. I salute all at Notebook who have worked tirelessly to make it a smooth and seamless journey for the students every year.”

The Grand Finale was attended live by over 3,500 students, parents and teachers across Zoom, and simulcast on YouTube.