Coming from the lineage of Kalaikkottu Maamuni and the dynasty of Veerapandya Katta Bomman, this Telugu speaking clan of Kambalatthu Naickers, have brought to the people, the art that was customarily performed when kings returned from victorious battles as well as during the auspicious temple festivities.

Sri Kannan Kumar has come with such a rich heritage. Right from his adolescent age, he has watched the elders in his native village of Kodangipatti perform this art and naturally picked up the nuances by simply observing them.

"Even before a child learns to walk, it learns to dance to this music and art.

Teaching happens in schools whereas,learning by oneself is the art of Devarattam," Said Kannan Kumar

1. From Kodangi village to the capital city of Delhi, he popularised the art of DEVARATTAM.

2. From Koothu pattarais to many theatrical stages, he took the nuances of the art so as to be relished by people at all levels.

3. From ancient art to the classical Bharatanatyam, he affirmed the impact that Devarattam had on these forms of art.

4. The Tamil Nadu Government recognised his services to this art and conferred on him the title of ' Graameeya Kalaimamani '.

5. More than 100,000 students have been tutored by him and they continue to revel in this art form.

6. That the art of DEVARATTAM goes beyond language barriers and by the rhythmic beat, it can even control the five senses, is the clear pronouncement by Sri Kannan Kumar to the world. 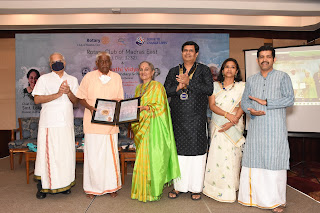 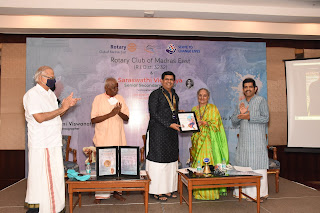 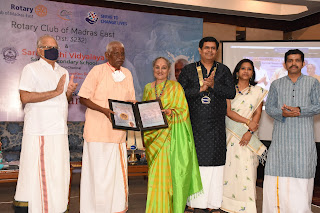 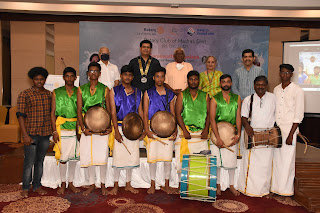 Chief Guest is Bharatanatyam Exponent, Guru Lakshmi Viswanathan is a rare artist. She is a dancer, choreographer, musician, scholar, author and aesthete. She has recently been a Tagore Fellow, a prestigious award for research endowed by the Ministry of Culture, Government of India. The Thanjavur heritage of Bharatanatyam has been her project, under the aegis of the Kalakshetra Foundation, Chennai. Currently she is editor of the Kalakshetra Journal which was founded by Rukmini Devi Arundale.

This award is sponsored by Saraswathi Vidyalaya Senior Secondary School and they have sponsored this event year on year.

Aanmajothi, the Cultural Wing of Saraswathi Vidyalaya also supports folk and indigenous arts and artists by enabling events in Public Spaces such as Parks and Metro Stations.
Posted by PadmaSabari at 04:14