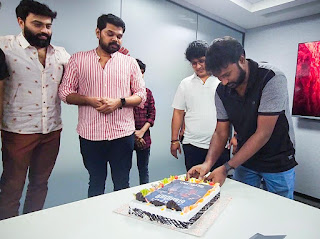 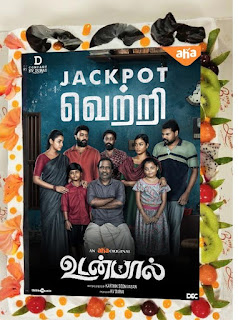 The film, which is a ‘Black Comedy’ set against family backdrops revolves around the theme of how money ruins relationships, by letting people go to any extent for the sake of acquiring it. Furthermore, the film imparts a beautiful message on how one should respect and love their parents.

Udanpaal won the heart of film critics and family audiences, thereby scaling more than 1 Crore streaming minutes on Aha Tamil. Marking this grand success, the film’s crew along with Aha Team celebrated the occasion by cutting the cake and thanked the critics and fans for their support.

Madhan Christopher has handled the cinematography for Udanpaal, which is a family entertainer laced with humour and emotions. Sakthi Balaji (Music), MSP Madhavan (Art), & G. Madan (Editing) are the other technicians.

Aha Tamil has been created with the motto of savouring the tastes of Tamil audiences. Apart from Original movies, the OTT platform has been consistently streaming Original series, Original Reality Shows, and many entertainment programs, created in collaboration with local talents that appeal to the interests of Tamil audiences.

It is worth mentioning that movies like Maamanithan, Kuruthi Aattam, and other Tamil flicks premiered on Aha Tamil have scaled more than 1Cr streaming minutes. With the recent premieres of Jiivi and Jiivi-2 crossing millions of streaming minutes, the latest arrival Udanpaal has crossed the 1-Crore streaming minutes mark. Aha Tamil which has been delivering 100% Entertainment to Tamilians all over the world has lined up a slew of original movies, series, and reality programmes, which will have official announcements made soon.

Posted by PadmaSabari at 00:26
Email ThisBlogThis!Share to TwitterShare to FacebookShare to Pinterest