The Pooja of the movie "Sannidhanam PO" starring Yogi Babu and Pramod Shetty was held at Sabarimala Sannidhanam on the Makara Jyoti day. Prominent director and Nayanthara's husband Vignesh Siva gave the first clap. Advocate K. Anantha Gopan, President of the Thiruvithamkur Devaswom Board, performed the switch on ceremony. Sabarimala is the backdrop for this Pan Indian film directed by Rajeev Vaidya. It is being produced by Madhusudhan Rao and Shabeer Pathan under the banners Sarvatha Cine Garage and Shimoga Creations. It is the first time in the history of cinema that a cinema pooja is held at the Sabarimala Sannidhanam on the Makaravilakku day. The shooting started on the same day. 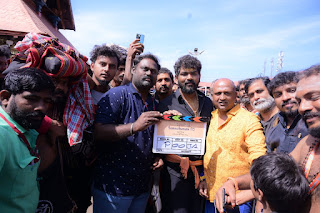 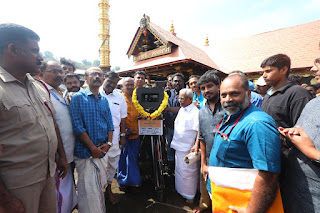 The background of the story is Sabarimala, the dolly carriers there and the Sannidhanam post office.

Posted by PadmaSabari at 08:33
Email ThisBlogThis!Share to TwitterShare to FacebookShare to Pinterest