Director Sandeep Reddy Vanga who created a sensation with his maiden directorial venture Arjun Reddy delivered much bigger blockbuster with its remake Kabir Singh. The director who made his mark both in Telugu and Hindi is making a true Pan India movie Animal and for the same, he collaborated with Bollywood superstar Ranbir Kapoor to offer a never before kind of experience to the audience of south and north. Bhushan Kumar and Pranav Reddy Vanga together are producing the film prestigiously on T Series and Bhadrakali Pictures. 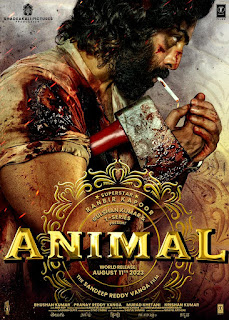 The makers wishing everyone on New Year released first look of the movie and going by the extremely monstrous avatar of Ranbir Kapoor, Animal is Sandeep Reddy Vanga mark intense drama loaded with action and emotion. Sandeep is presenting Ranbir in a first of its kind action-packed role. Sporting long hair and rock beard, Ranbir is seen holding a sharp axe. There is blood all over his body. The intriguing first look poster sends chills down our spines. This is just a first look poster, but the poster has created a massive impact already.

The crazy combination of Ranbir Kapoor and Sandeep Reddy Vanga features some prominent actors in important roles. National crush Rashmika Mandanna is playing the leading lady opposite Ranbir, while Anil Kapoor will be seen in an important role.

Top-notch technicians will handle different crafts of the movie which will release in cinemas in Hindi, Telugu, Tamil, Kannada and Malayalam languages during Independence weekend on August 11, 2023.

Posted by PadmaSabari at 05:46
Email ThisBlogThis!Share to TwitterShare to FacebookShare to Pinterest