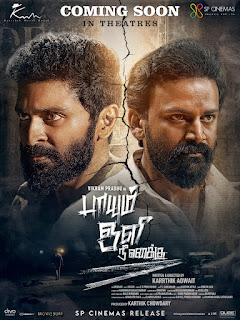 SP Cinemas has been a pioneer in the Tamil movie industry for producing films with unique and entertaining contents. The production house, which is inclined to the absolute commitment of producing and releasing good quality films, has cherry-picked Vikram Prabhu’s upcoming film “Paayum Oli Nee Yenakku” and will release it all over India and Worldwide. The movie will released in Tamil,Kannada & Telugu.

Karthik Adwait in his Tamil Debut, has written, directed, and produced this film for his production house Karthik Movie House.Karthik Adwait is an alumini of New York Film Academy. Post his degree, Karthik worked under acclaimed senior Editor Kotagiri Venkateswara Rao garu, who is known for his association with Director Rajamouli garu. Karthik has directed many ad films and his next film  with Kannada Superstar Dr.Shivaraj Kumar who is currently playing a key role in Super Star Rajinikanth starrer JAILER , has been announced and shooting begins mid of  2023.

The brilliantly presented action teaser has already heightened the expectations of the film for its sleek visuals and cuts, scintillating music, and outstanding screen presence of Vikram Prabhu.

Kannada Industry’s most celebrated actor Daali Dhananjaya plays the main antagonist in this film and his action scenes will elevate the film to another dimension. Vani Bhojan plays the female lead character and the others in the star cast include Anand,Vivek Prasanna, Vela Ramamoorthy among others who perform pivotal characters in this movie.

SP Cinemas is currently producing Harish Kalyan starrer DIESEL and has produced films based on unique genres and themes like K13 (Arulnithi),  Maara (Madhavan), Oh Manapenne (Harish Kalyan) to name a few which have won acclaimed responses from both critics and the audience. SP Cinemas has distributed several content-driven successful movies and Ashok Selvan starrer Vezham and  National award-winning Tamil movie ‘Baaram’ are notable among them.

Posted by PadmaSabari at 03:52
Email ThisBlogThis!Share to TwitterShare to FacebookShare to Pinterest