Do you want to know who is Madhuri Dixit’s favourite Bigg Boss OTT contestant this year ? It is none other than Karan Nath. Check it out!

They say fortune favors the brave and in this scenario it’s not just fortune for Karan Nath but support from some of the finest actors in the Bollywood. Karan who is one of the participants in Bigg Boss OTT has been receiving a lot of accolades recently. The talented actor who has done some impactful films in Bollywood is one of the contestants on the pilot season of the show. 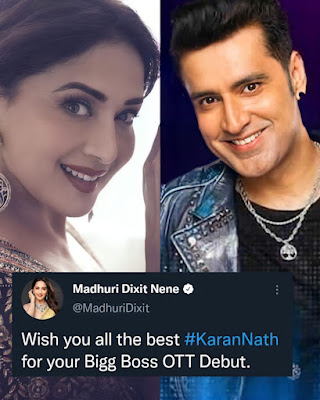 The industry’s  stalwarts are seen coming out in support of their favourites to save them from nominations. Actor Shakti Kapoor and Madhuri Dixit has a massive fan following and their support for Nath will just increase the army of supporters for him.

Karan Nath’s game in the Bigg Boss is loved by many. He has raised his voice in many occasions when required.  He was also appreciated by matchmaker Sima Taparia too who entered the Bigg Boss House lately.

Well, what can be better for Karan Nath receiving support from outside and that too from actors who have made a mark in the industry. Shakti Kapoor and Madhuri Dixit’s support would definitely a bigger boost for him to play his game. The one which is loved by millions out there!