Celebrating 75th Year of Indian Independence, Vishnu Vardhan Induri of Vibri Motion Pictures, the producer of highly anticipated films "83" and "Thalaivi", announced a Feature Film Franchise titled "Azad Hind", as a tribute to the Unsung Heroes of Indian Independence Fight who are lost in history. 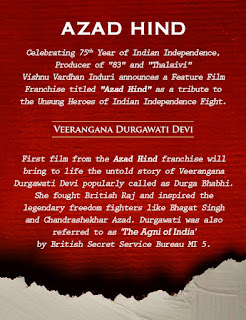 First film from the Azad Hind franchise will bring to life the untold story of Veerangana Durgawati Devi popularly called as Durga Bhabi. She fought British Raj and inspired the legendary freedom fighters like Bhagat Singh and Chandrasekhar Azad. Durgawati was also referred to as “The Agni Of India” by British Secret Service Bureau MI 5.

Unlike other freedom fighters, after Indian independence, Durgawati started living as a common citizen in quiet anonymity and exclusion in Ghaziabad. She started a school for poor children in Lucknow. Durgawati Devi died in Ghaziabad on 15 October 1999 at the age of 92.

A star heroine will be roped in to play Durgawati Devi in the prestigious project. Director and other details of the film will also be unveiled soon.

Posted by PadmaSabari at 22:07
Email ThisBlogThis!Share to TwitterShare to FacebookShare to Pinterest