~Travels to the Jewel of West India—Gujarat to discover next 10,000 stars out of India~

After a super successful first edition in Lucknow earlier this year, Josh – India’s fastest growing and most-engaged short video app kicks off the second edition of its multi-city mega talent hunt, ‘World Famous’ in Gujarat. Unique to its kind, this first original IP is Josh’s quest to tap into the hidden talent pool of the country and discover the next 10,000 stars for the world.

A 20-day exhilarating event spanning three cities of Gujarat, has already landed in Baroda and Surat to hunt for the creative prodigies, before travelling to Ahmedabad and finally wrapping up in a Grand Finale at the Statue of Unity on September 23, 2021. As Josh travels through the streets of Gujarat in search of its next set of stars, the cities teem with the buzz of creation as Josh mentors interact with aspiring creators at lively centres and activations placed through the cities’ hotspots including malls, cafes, colleges and localities 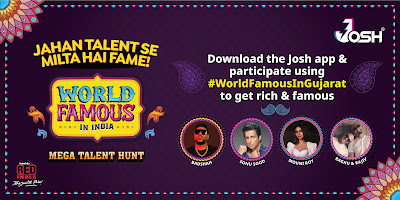 The dynamic campaign is driven digitally on the Josh app, inviting chef, dancers, poets, singers, photographers or artists across the state to post enthralling videos showcasing their creativity on the app using the hashtag #WorldFamousInGujarat. Top creators with unique videos and innovative content will be shortlisted for the semi-finals in Baroda (Sep 11), Surat (Sep 12) and Ahmedabad (Sep 19) where they will be mentored by popular reality TV creator duo Raghu Ram-Rajiv in Baroda, renowned actress Mouni Roy in Surat and rapper Badshah in Ahmedabad who will groom them in their journey to stardom. The winners from the semi-finals will then travel for the Grand Finale at Statue of Unity, where Bollywood celebrity Sonu Sood would announce the final set of winners to be further enrolled into Josh All Stars, India’s first and largest formal creator training academy.

On launching the second edition of World Famous, Seher Bedi, Head of Josh Studios said, “Following our grand success in Lucknow, we are super excited to see what Gujarat has to offer. We are here to discover the real jewels from the ‘Jewel of West India’. If Lucknow has taught us anything, it is to only expect the best. We built Josh with the intention of celebrating creativity and World Famous is just another expression of that intention. Every talent is unique and deserves to be celebrated and Josh is here to find those 10,000 stars for India.”

Josh Studios was unveiled earlier this year to scale the short-video platform’s capabilities to create a cutting-edge content and talent hub. ‘World Famous’ was the Studio’s first signature roll out for Josh that launched in August 2020 as a mahagathbandhan of India’s top creators, biggest music labels and many million UGC creators.