Samantha's upcoming Action Thriller 'Yashoda' directed by Hari - Harish is up for release on November 11th 2022. 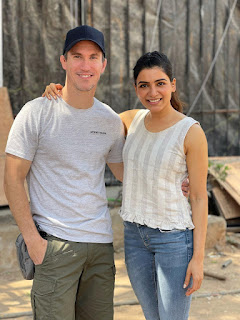 Produced by Sivalenka Krishna Prasad's production under Sridevi Movies, movie is made on a lavish budget and the Production values are evident in the recently released trailer trailer.

Garnering immense hype on the movie, Trailer gave a glimpse of the concept of story and even the action, emotion and thrill we shall witness in theatres.

Glad by the response, Action choreographer Yannick Ben reveals insights about the making of the these High-voltage Fights & Stunts by Samantha. Reveals that her dedication is at next level and it's her will power that made the entire sequences thrilling.

He worked with Samantha earlier for 'Family Man 2' webseries and now they team up for the best action in 'Yashoda'.

Posted by PadmaSabari at 07:51
Email ThisBlogThis!Share to TwitterShare to FacebookShare to Pinterest