Ayali ZEE5, India’s largest home-grown video streaming platform, announced its next Tamil original series ‘Ayali’ today. After the stupendous success of Vilangu, Fingertip S2 and PaperRocket last year, ZEE5 is starting the new year with a bang with the launch of its first Tamil Original series of 2023, Ayali. Produced by S. Kushmavathi’s Estrella Stories and directed by Muthukumar, the 8-episodic series stars Abi Nakshatra, Anumol, Aruvi Madhan, Lingaa and Singampuli in prominent roles and will stream on ZEE5 from 26th January 2023. 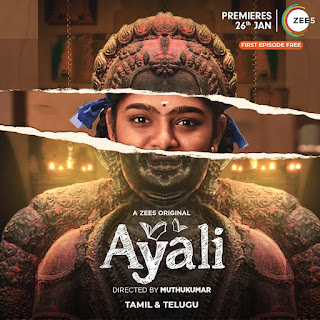 Ayali is a social drama about a young teenager Tamil Selvi who is studying in the 8th grade and dreams of becoming a doctor. However, the existing customs in her village Veerappannai demand girls to get married once they hit puberty. The belief is that the Goddess Ayali will get angry and curse the village folks if this tradition is not adhered to. Shattering age-old beliefs and customs, the young girl fights against all odds to achieve her goal of becoming a doctor. However, will she emerge victorious in bringing about the change that could light the way for other little girls in the village of Veerappannai?

A coming-of-age story which highlights the grit, wit and free will of a youngster, Ayali traces the journey of Tamil Selvi in her quest to break age old customs and rituals and ensure. Kiruthiga Udhayanidhi, director of Paper Rocket, proudly announced the launch of the show to audiences.  In addition to the main cast, Ayali also has guest appearances by Lakshmi Priya, Smruthi Venkat and Bagavathy Perumal. With a stellar cast, a social message and an entertaining plot, Ayali is set to premiere on ZEE5 on 26th January.

Manish Kalra, Chief Business Officer, ZEE5 India said, “After the phenomenal response to our Tamil originals like Vilangu, Fingertip and PaperRocket last year, we are set to bring forth another entertaining and unconventional series, Ayali. We at ZEE5 believe that entertaining content with a social message has the power to inspire, educate, enlighten, inform, and influence the audience and Ayali is just that. The story of this young girl who chases her dream of becoming a doctor by breaking age-old customs and beliefs is sure to inspire many other girls to believe in their dreams and just go after it”.

Director Muthukumar said, “Streaming platforms today are presenting stories which are successfully changing the perspective of masses and Ayali is our sincere attempt to instil that change without being preachy. The series is a coming-of-age tale of women education and empowerment and fighting against all odds to achieve ones dreams and aspirations. We are grateful to ZEE5 for giving us their platform to showcase this need of the hour story”.

Posted by PadmaSabari at 19:59
Email ThisBlogThis!Share to TwitterShare to FacebookShare to Pinterest