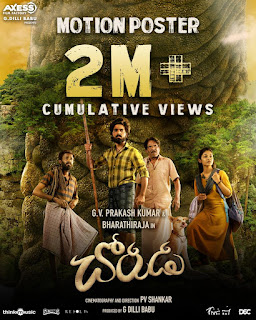 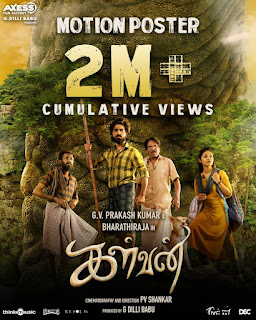 The brand ‘Demonte Colony’ has become a source of attraction among film buffs, especially horror movie fans, for the first installment created a sensation for its fresh storytelling laced with spine-tingling moments. With actor Arulnithi and filmmaker Ajay Gnanamuthu collaborating for ‘Demonte Colony 2’, the expectations have sky-rocketed to the peak.

Over the past few days, the cryptic poster of ‘Darkness Will Rule’ has been tickling the inquisitiveness of fans. The makers are happy now to bring up unparalleled creativity with the first-of-its-kind posters all over the country for this movie.

The posters will have a QR Code, which by scanning, will unveil the film’s Announcement video. Such an innovative approach with the posters elevates the anticipatory levels of the film.

The crew has already completed 40% of the shooting with the first schedule and has kick-started the next leg of the shoot in Chennai. Ajay Gnanamuthu, director & producer of the film, is elated about the rapid progress of the project and thanks the entire team for the support.

Tagged with the words “Vengeance of the Unholy”, Demonte Colony 2 features Arulnithi as the lead character, and Priya Bhavani Shankar stars opposite him in the female lead role.

The film features a musical score by Sam CS, cinematography by Deepak D Menon, editing by Kumaresh D & Art Direction by Ravi Pandi. Ganesh (Stunts), and Navadevi Rajkumar & Malini (Costume Designs) are the others in the technical crew.

Ajay Gnanamuthu's Gnanamuthu Pattarai and Vijay Subramanian's White Nights Entertainment are jointly producing Demonte Colony 2, which is being made with a high production value.

Posted by PadmaSabari at 18:36
Email ThisBlogThis!Share to TwitterShare to FacebookShare to Pinterest