Producer Kannan Ravi’s upcoming movie ‘Raavana Kottam’ featuring Shanthnu Bhagyaraj and Kayal Anandhi in the lead roles is directed by Vikram Sugumaran of Madha Yaanai Koottam fame. With the film’s shooting and postproduction work completed, the first look poster is released today (January 10, 2023). The makers also confirm that the Raavana Kottam trailer will be attached with Thunivu and Varisu on 250 screens all over Tamil Nadu. 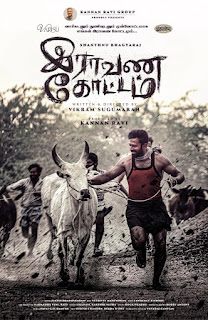 Producer Kannan Ravi, Kannan Ravi Group says, “We are elated to see the good response for the first look poster of our movie ‘Raavana Kottam’.  We are excited to have the trailer getting screened along with Ajith Kumar sir’s Thunivu and Vijay sir’s Varisu on 250 screens all over Tamil Nadu. We will be soon announcing the release date of the film as well. I thank director Vikram Sugumaran, actor Shanthnu Bhagyaraj, actress Anandhi,  Music director Justin Prabhakaran and the entire team for the support.”

Justin Prabhakaran, who has found a phenomenal reach across the Pan-Indian domain for his outstanding musical score is composing music for this film. While Shanthnu Bhagyaraj and Kayal fame Anandhi play the lead roles in this movie, and the others in the star cast include Prabhu, Ilavarasu, PL Thenappan, Deepa Shankar, Aruldoss, and many prominent actors.

Posted by PadmaSabari at 00:33
Email ThisBlogThis!Share to TwitterShare to FacebookShare to Pinterest