Producer S Lakshman Kumar of Prince Pictures has been churning out excellent family entertainers with content-driven stories, which have garnered good reception among audiences and critics. The year 2022 became a commendable phase for his production house as the Diwali release Sardar starring Karthi in dual roles, was a blockbuster hit. Following the grand success of this movie, the next outing - ‘Kaari’ starring Sasikumar in the lead role, garnered good reviews. 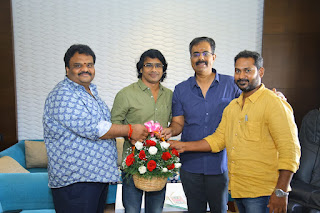 Following the grand success of Sardar and Kaari, Prince Pictures is happy to welcome filmmaker Andrew Louis (“Kolaigaaran” and “Vadhandhi: The Fable of Velonie” fame)

With producer S Lakshman Kumar of Prince Pictures and director Andrew Louis illustrious for entertaining audiences with unique content-driven entertainers, their collaboration for a new project has created groovy expectations among film buffs.

The official announcement about the film’s cast and crew will be revealed soon.

Posted by PadmaSabari at 02:02
Email ThisBlogThis!Share to TwitterShare to FacebookShare to Pinterest