R Madhavan’s Rocketry: The Nambi Effect makes it to the Oscars 2023

*R Madhavan’s Rocketry: The Nambi Effect makes it to the Oscars 2023 contention list*

Reaping harvest with heart-warming reception all over India, R Madhavan’s directorial debut ‘Rocketry: The Nambi Effect’ finds itself in headlines for yet another reason now by making it to the Oscars 2023 contention list. The film was released last year on July 1st, 2022, and opened to tremendous response. In particular, Madhavan’s adroitness in crafting a hard-hitting biographical drama based on the life of Nambi Narayanan, the ISRO scientist who got accused of espionage and later acquitted. The scintillating work of actors, and technicians, and R Madhavan's brilliant screenwriting brought forth a great response from critics and general audiences. Significantly, the crew is elated to see yet another embellishment to their celebration as the film makes it to the list of Oscars 2023 contention now. 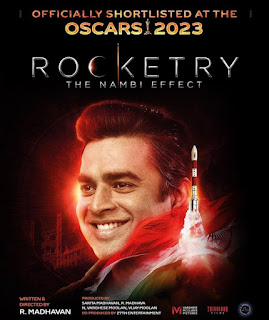 The film has already been labeled as the ‘Most Popular Movie of India in 2022’ by IMDB. Besides, Rocketry, written, directed by, and produced by R Madhavan, who played the lead role of Nambi Narayanan found phenomenal reception during its premiere at Cannes International Film Festival in 2022.

The movie created on a big budget was shot across the exotic locales of India, France, Canada, Georgia, and Serbia. With Shahrukh Khan and Suriya appearing in cameo roles, the others in the star cast include Rajit Kapur, Simran, Sam Mohan, Meesha Ghoshal, and many more prominent actors.

Posted by PadmaSabari at 04:08
Email ThisBlogThis!Share to TwitterShare to FacebookShare to Pinterest