Victory Venkatesh who is riding high with the blockbuster success of F3 will be joining forces with the very talented director Sailesh Kolanu who delivered consecutive hits with the HITverse, for a high-budget film to be produced by Venkat Boyanapalli of Niharika Entertainment. 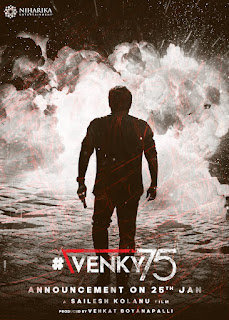 The landmark 75th film of Venkatesh- #Venky75 is production No 2 from Niharika Entertainment and they made a successful foray into production with Shyam Singha Roy. The most prestigious project of the production house will be mounted on a large scale. This indeed will be the highest-budget movie for Venkatesh.

Obviously, there will be high expectations on the film coming from successful people. The pre-look poster sees a silhouette image of Venkatesh who holds something in his hand. It’s not a gun and it’s something else that will be revealed on the 25th of this month. The pre-look poster with a huge blast and dense smoke indicates Venkatesh’s intense character and an action genre of the movie.

Sailesh Kolanu who wrote a winning script will be presenting Venkatesh in a first-of-its-kind role in the movie that will feature several prominent actors. Noted technicians will handle different crafts. The makers will announce the other cast and crew soon.

Posted by PadmaSabari at 00:20
Email ThisBlogThis!Share to TwitterShare to FacebookShare to Pinterest